Earlier in the day, the General Staff of the (North) Korean People's Army said it is reviewing an action plan to advance into "the zones that had been demilitarized under the north-south agreement, turn the front line into a fortress and further heighten the vigilance" against the South.

The statement came on the heels of a bellicose rhetoric by Kim Yo-jong, the powerful sister of North Korean leader Kim Jong-un, who said the North will take military action to punish South Korea for failing to stop defectors from launching anti-Pyongyang leaflets across the border.

"We take this situation seriously. As for North Korean military moves, South Korea and the U.S. are closely monitoring and detecting them under close coordination," ministry spokesperson Chok Hyun-soo said in a regular briefing, stressing that the military is in a full readiness posture in preparations for "any circumstances."

The North Korean military did not provide specifics on its next steps, but it may refer to regions around the border town of Kaesong and the Mount Kumgang, where it has pulled out its troops to facilitate now-defunct inter-Korean economic and tourism projects.

Under the inter-Korean military pact signed on Sept. 19, 2018, named the Comprehensive Military Agreement (CMA), the two Koreas also implemented several tension-reducing measures, such as demilitarizing the Joint Security Area (JSA) that straddles the two Koreas and vacating their guard posts inside the Demilitarized Zone (DMZ).

"The inter-Korean military pact should be kept. This is our basic stance," Choi said. "While maintaining firm readiness posture, we believe efforts that we've made to promote peace on the Korean Peninsula should continue." 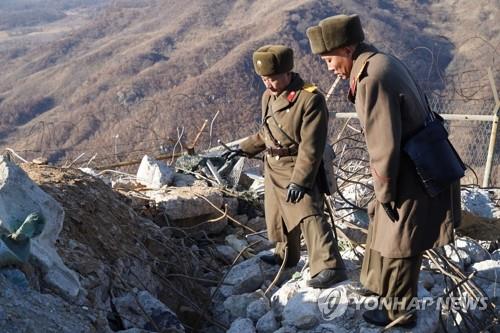