SEOUL, June 16 (Yonhap) -- What's your image of a baseball hitter near the bottom of a lineup? Maybe it's a light-hitting, defense-first catcher. Or it's a light-hitting, speed-first, defense-second middle infielder. Or it could be an aging corner outfielder holding down that spot just because someone has to.

The NC Dinos, the best team in South Korean baseball so far this year, have the luxury of employing a strapping center fielder in the lower third of their batting order, a former major leaguer with a swing so compact and yet powerful that you wouldn't want to be the ball that meets the barrel of his bat. This player once launched 19 home runs in a major league season. 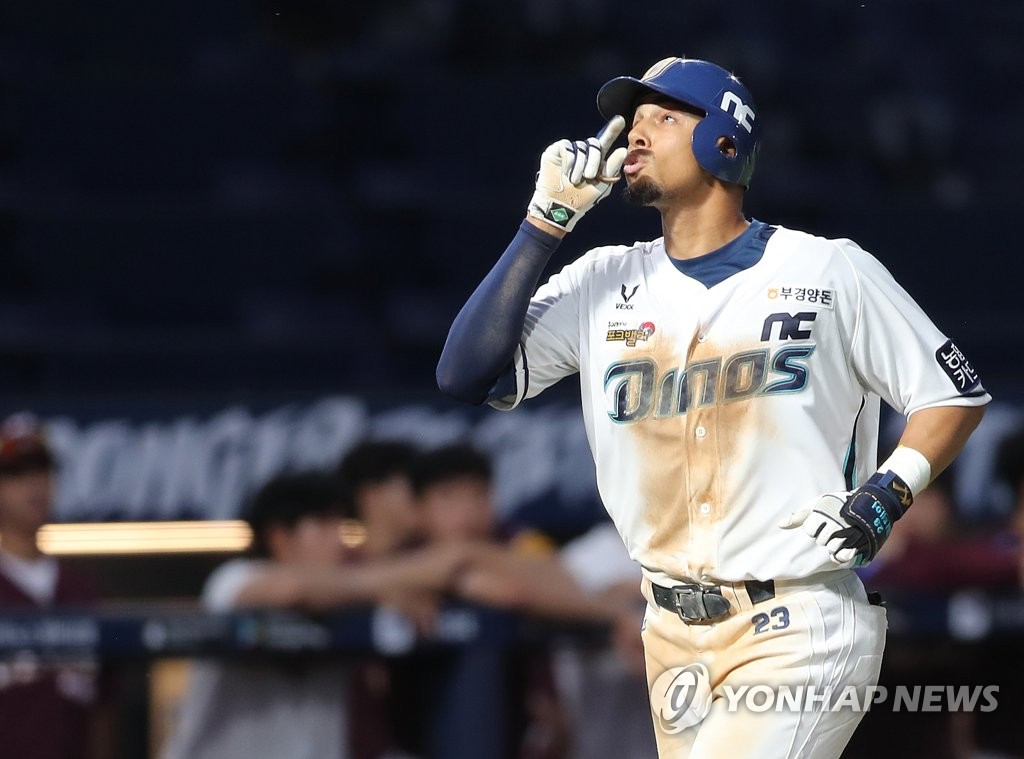 In 22 games since May 21, Aaron Altherr has batted either seventh or eighth. In that time, Altherr leads the KBO with 31 RBIs, while seven home runs and a 1.202 on-base plus slugging percentage put him in second place.

The former Philadelphia Phillies outfielder opened his first KBO season mostly batting second, with a couple of appearances in the cleanup spot as well. But in his first 13 games, Altherr had just two homers and four RBIs. Before manager Lee Dong-wook moved him to the eighth spot on May 21, Altherr was batting .182/.265/.341.

"I don't think it necessarily has to do with the order I am batting. Just overall, I am feeling a lot more comfortable and a lot more confident," Altherr told Yonhap News Agency in a phone interview Tuesday. "I knew there'd be an adjustment period, coming to a new country and a new league."

As is the case with most hitting slumps, Altherr said his early season slump was "definitely more mental" than physical.

"I felt like my swing was fine. The problem was more mental, thinking too much at the plate, about what they're going throw," he said. "It's mostly what the game is. Everybody has all the tools. What separates guys is the mental ability. That was the part I had to get over, knowing that I got this and just relaxing." 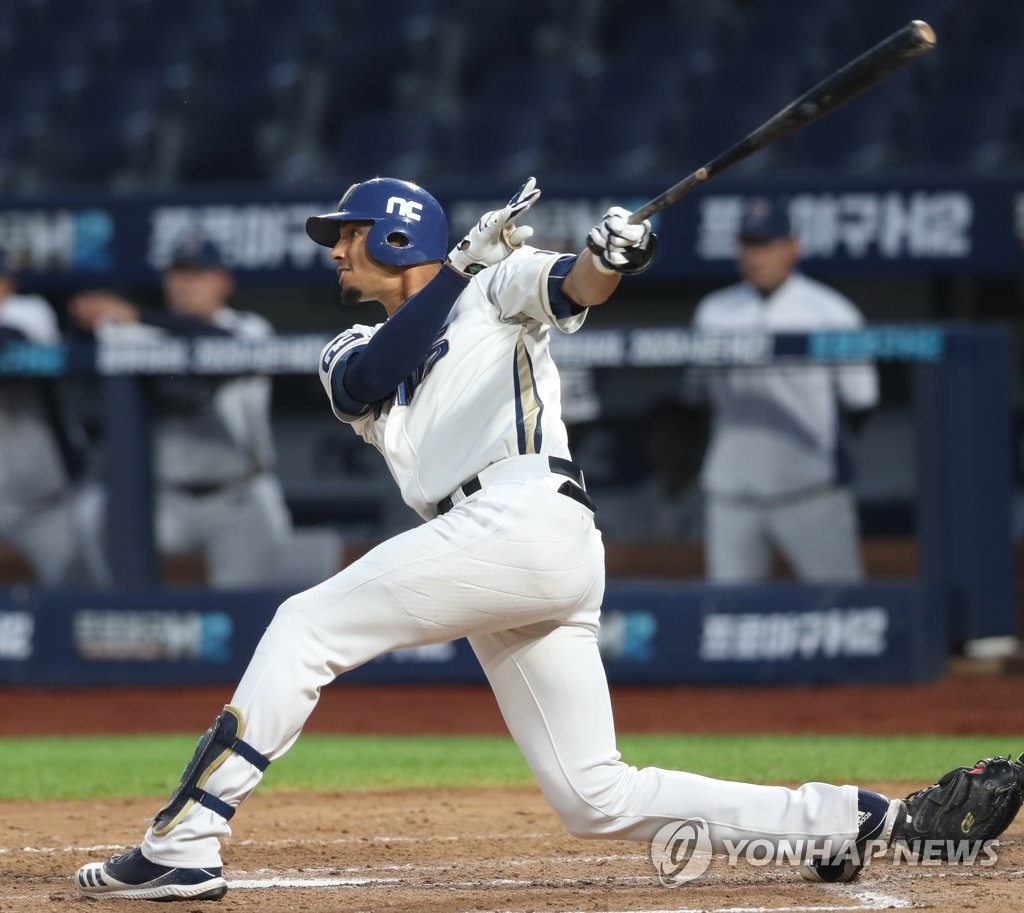 Altherr noted that Lee got him out of the middle of the lineup to lift some pressure off his shoulders. Despite his major league credentials, Altherr had no trouble accepting that move down the order.

Asked if he had to swallow any pride, Altherr said, "Not at all. I was struggling at the time. It wasn't any secret."

Lee and Altherr had a chat before Altherr started in the eighth spot for the first time on May 21 against the Doosan Bears. Lee told Altherr that he still believed in him and he knew the player was going to come through at some point.

Altherr went 3-for-4 with a home run and three RBIs in that game.

Say what you will about the RBI, a stat that has lost some of its luster over the years among the analytically minded fans and observers for its randomness and an element of luck that comes into play.

Still, it's hard to entirely discredit a hitter who can consistently drive in runners with timely hits and, better yet, home runs.

Altherr has climbed to No. 2 in the league in the RBI department, nestled among sluggers who hit in the heart of their respective lineups.

The Dinos' lineup this season is so deep that Altherr is one of four NC players ranked among the top 10 in the league in RBIs.

"Batting seventh is almost like (being) a cleanup hitter because I always have guys on base anyway," Altherr said. "It's nice being able to hit with a lot of runners in scoring position." 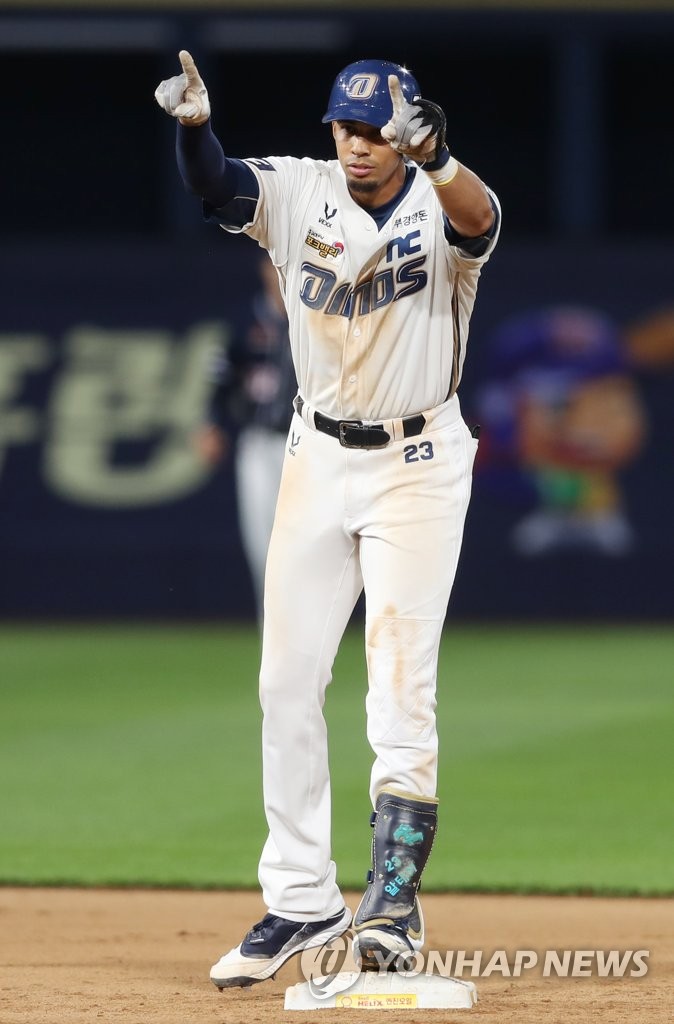 Check out these numbers for players who typically bat ahead of Altherr. Kang Jin-sung, in the midst of a breakout campaign as their cleanup or No. 5 hitter, leads the KBO with a .500 on-base percentage. Kwon Hui-dong, who often bats sixth, has a .451 on-base percentage. Veteran Park Sok-min, who has mostly hit in the fifth or sixth spots, has a .395 on-base percentage, and leads the team with 18 walks.

The Dinos have the best team on-base percentage this season with .382.

With so much traffic on base paths ahead of him, Altherr said there's no point of fixing what's clearly not broken.

"Honestly, it doesn't matter to me where I hit. We have guys on base all the time no matter where I am hitting," he said. "It's working out really well. Wherever manager Lee wants to do with the lineup, that's on him. I am happy with wherever I hit."