SEOUL, June 16 (Yonhap) -- The Bank of Korea (BOK) may be left with no choice but to further push down its policy rate to yet another record low should the pandemic-sparked economic fallout continue to worsen down the road, minutes from the BOK's latest rate-setting meeting showed Tuesday.

In the May 28 meeting, the BOK's seven-member board voted unanimously to slash the base interest rate to a new record low of 0.50 percent, with one board member temporarily excluded from the vote due to a possible conflict of interest.

Most of BOK board members also highlighted the need to use non-monetary policy means, such as quantitative easing, to further support the pandemic-hit economy if necessary, according to the minutes.

"Overall, the uncertainties in the financial market caused by the global spread of COVID-19 are considerably slowing down, but the negative impact of worsening economic conditions at home and abroad on the country's real economy are expected to last for some time," a BOK member was quoted as saying in the meeting. 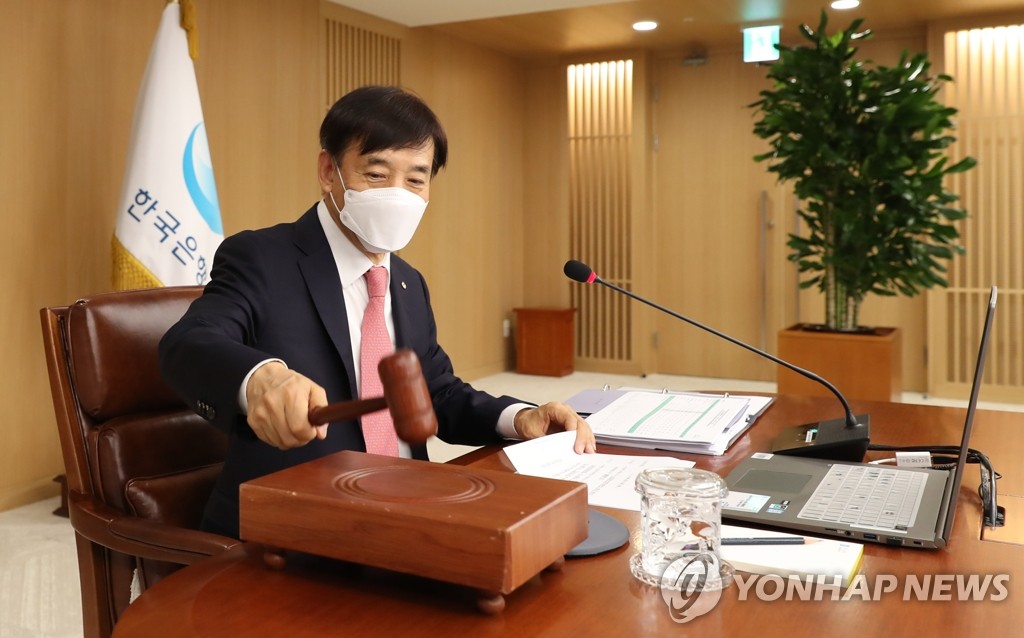 The latest rate cut came about two months after the bank delivered its first emergency rate cut in over a decade, slashing the key rate by half a percentage point to 0.75 percent.

The rate cut has, inevitably, prompted a debate over the possible floor for the country's policy rate, which according to BOK Gov. Lee Ju-yeol, is "generally thought to be higher than those of major economies" such as the United States.

Several board members noted the country may still have room for additional policy maneuvers.

"The low boundary for the policy rate may differ, depending on how it is determined, but in the sense that the interest rate gap between South Korea and the United States is a key element that affects capital flows to and from our country, the country may have been given additional room for an additional policy rate cut by the U.S. Fed's rate reduction," a BOK member said, according to the released minutes.

The United States' policy rate currently sits in a range of 0 percent and 0.25 percent following two emergency rate cuts by the Fed in March.

BOK members underscored the need to further support the local economy in the May meeting.

"I believe there will be a need to maintain an easing stance of the monetary policy and also consider various other monetary policy steps while closely monitoring the possibility of the economic slump at home and abroad further deteriorating due to resurgence in the COVID-19 pandemic," a BOK member was quoted as saying.

The BOK also forecast the local economy to shrink 0.2 percent on-year in 2020, marking its first on-year contraction since 1998 and only the third in its entire history.

But the local economy may contract by as much as 1.8 percent this year should the fallout from the pandemic turn out to be more serious than currently anticipated, the bank said.

Some of the BOK members pointed to the possibility of record low rates leading to a surge in household debt, creating long-term financial risks for Asia's fourth-largest economy.

"However, in a crisis such as now, policy decisions must take priority. I believe now is the time to temporarily put behind the concerns over debts and deal with the crisis at hand caused by the COVID-19 pandemic with active macroeconomic policy steps," one member said.

The BOK is set to hold its next rate-setting meeting on July 16.