(ATTN: UPDATES throughout with meeting results)

SEOUL, June 16 (Yonhap) -- Hours after North Korea demolished the inter-Korean liaison office in its border town of Kaesong in a surprise provocation Tuesday, South Korea warned that it will "strongly respond" if the North further worsens the situation.

Cheong Wa Dae made the warning after discussing the matter in an emergency meeting of the National Security Council (NSC) standing committee here.

"The government expresses strong regret over North Korea's unilateral detonation of the inter-Korean liaison office building," Kim You-geun, deputy director of Cheong Wa Dae's national security office, told reporters after the meeting. "We sternly warn that we will strongly respond to it if North Korea takes any action that further worsens the situation."

According to the defense and unification ministries, North Korea blew up the inter-Korean liaison office in its border town of Kaesong at 2:49 p.m. The North's Korean Central News Agency later confirmed that it "completely ruined" the building.

During the press briefing, Kim also said the demolition constitutes an action that betrays "the expectations of all people who wish for the development of the inter-Korean relation and the settlement of peace on the Korean Peninsula."

The NSC meeting was presided over by Chung Eui-yong, director of the national security office at the presidential office. 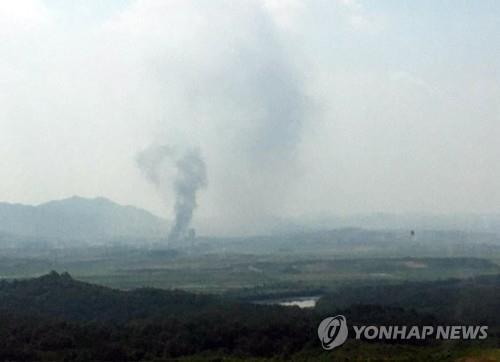