SEOUL, June 16 (Yonhap) -- Dixon Machado had three hits, including a key RBI single in the eighth, as the Lotte Giants got past the Kiwoom Heroes 7-5 to open their Korea Baseball Organization (KBO) midweek series on the road on Tuesday.

Machado, a shortstop getting a breather from the field as the designated hitter in this game, enjoyed his second three-hit game in six days, and has now hit safely in seven of his past eight games.

Lotte starter Noh Kyung-eun improved to 3-2 after holding the Heroes to three runs on three hits in six innings at Gocheok Sky Dome. The Giants snapped their losing streak at the dome at nine games to improve to 19-17, while the Heroes fell to 20-17.

Noh's counterpart, Eric Jokisch, allowed a season-high four runs, two unearned, in six innings to drop to 5-2 for the season. His ERA went up from 1.49 to 1.68. 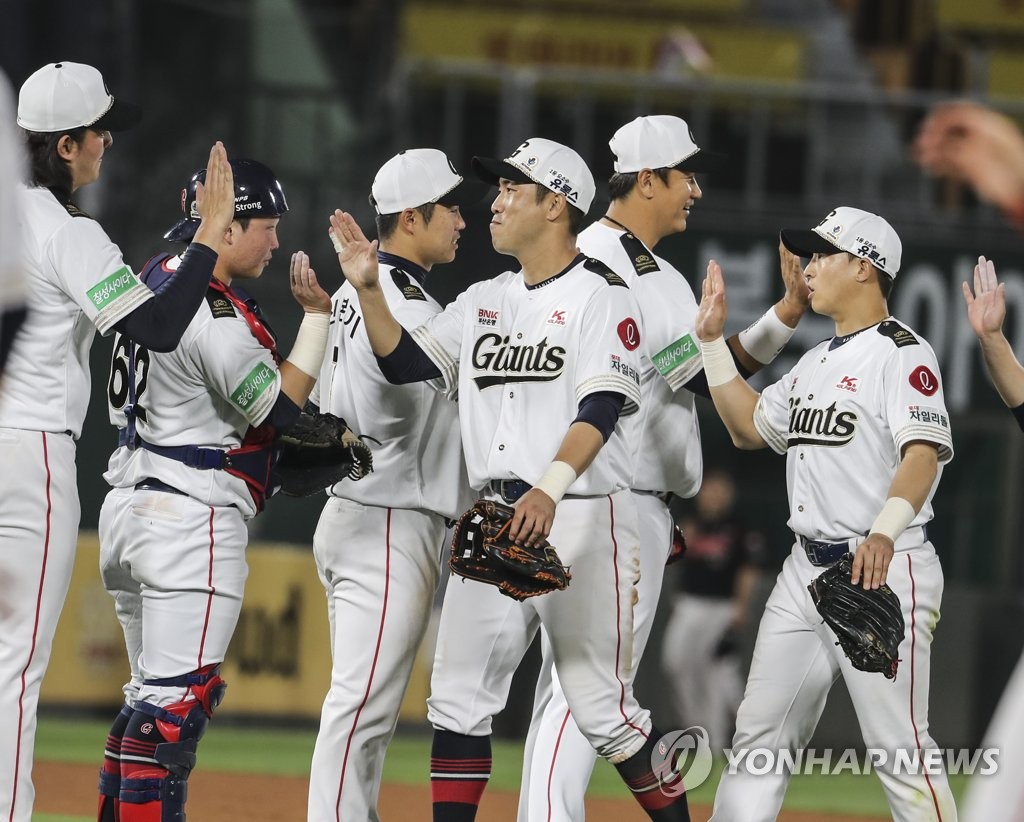 The Giants took a 2-0 lead in the top of the second inning on two throwing errors in one sequence by the Heroes.

As Bae Seong-geun struck out swinging against Jokisch, Dixon Machado at second and Kim Min-su at first attempted a double steal. Catcher Park Dong-won threw to second base before anyone could get there to catch it, and Machado scored easily as the ball trickled into center field. Kim ran toward third on the initial error.

Center fielder Park Jun-tae picked up the ball but airmailed his throw to third. The ball ricocheted off the dugout padding and rolled back toward the mound, with no Kiwoom fielder anywhere near it.

Jokisch ran after it and grabbed it, but made a wild throw home as Kim slid in safely.

Park Dong-won atoned for his throwing miscue with a solo home run in the bottom second, cutting the deficit to 2-1 before leaving the game with a knee injury.

But the Giants restored their two-run lead with a homer of their own, as cleanup Lee Dae-ho delivered a solo shot off Jokisch in the top fourth.

Min Byung-hun scored from second on a wild pitch to put the Gaints up 4-1 in the top fifth. Jokisch bounced a pitch in the dirt and it popped up high above new catcher Lee Ji-young, who lost sight of the ball as it went all the way to the backstop. Min, with a full head of steam, beat the throw home.

The Heroes, though, made the game more interesting in the bottom fifth, as Heo Jung-heop smacked a two-run home run off Lotte starter Noh Kyung-eun and cut the deficit to 4-3.

Machado gave the Giants some breathing room with a one-out RBI single in the eighth for a 5-3 lead, his third hit of the evening. With a runner at second, Kiwoom reliever Kim Tae-hun intentionally walked Lee Dae-ho to set up a potential double play. Machado had other ideas, as he jumped on the first pitch and pulled a screamer down the line, off the glove of third baseman Jeon Byeong-woo.

Kim Min-su's follow-up single loaded the bases for pinch hitter Kim Jae-yu, who sent a sharp single up the middle to drive in two more runs for a 7-3 advantage.

The Heroes got a run back in the eighth on an infield single and another with a sacrifice fly in the ninth before coming up short.

"Starter Noh Kyung-eun relied on his veteran savvy to survive some tight situations," Her said of his 36-year-old right-hander. "Our hitters captalized on their chances. Machado was great from the middle of the lineup, and Kim Jae-yu gave us that huge hit off the bench."

Kim, a seldom-used reserve, said he was excited to get a chance to bat at a critical juncture.

"Even at two strikes, I didn't feel like I was going to strike out. I was confident I could get the job done," Kim said. "When I got called up from the minors in the past, I used to worry about every at-bat. Now, I am just trying to focus on things I can control."