Hours earlier, Kim Yo-jong, a powerful sister of the leader, launched an unusually harsh direct criticism of Moon over his remarks on inter-Korean relations on the 20th anniversary of the historic June 15 Joint Declaration. Moon reaffirmed his unswerving commitment to a pair of 2018 summit deals with the North and called on its sitting leader not to reverse it.

He suggested that the two sides push for a breakthrough on their own with the Pyongyang-Washington negotiations in limbo. 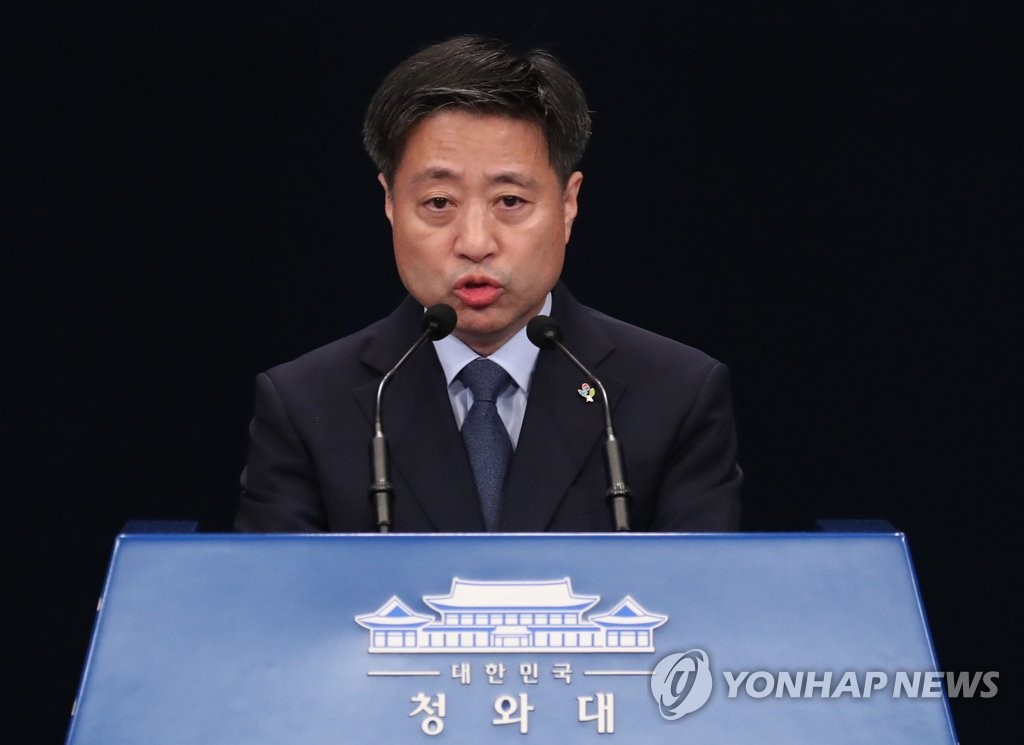 The North said Moon had "begged" it to accept his scheme to send either National Security Director Chung Eui-yong and National Intelligence Service Director Suh Hoon as a special envoy.

Making public such a sensitive issue unilaterally is something of a taboo in diplomacy and other state-to-state relationships.

His strongly worded statement against the North came shortly after Cheong Wa Dae convened an emergency virtual conference of the National Security Council for an analysis of the North's new statements.

The North's verbal attack on Moon poses a setback to a "top-down" approach in the already troubled peace process.

Seeking a dramatic improvement in Seoul-Pyongyang relations, Moon has apparently pinned hopes on his key asset in the peace initiative: personal ties with Kim Jong-un based on their four rounds of meetings. The two had one-on-one summit talks three times in 2018 followed by a trilateral Panmunjom gathering involving U.S. President Donald Trump last year.

Moon met with Kim's sister, known as the closest aide to the North's leader, at Cheong Wa Dae in early 2018 when she visited South Korea to attend the opening ceremony of the PyeongChang Winter Olympic Games. At that time, she served as a peace messenger between the leaders of the two Koreas.

She's now playing a "bad cop" role at the forefront of Pyongyang's hard-line campaign against Seoul.

The North has effectively negated the Sept. 19 comprehensive military agreement. Its military announced plans to redeploy troops at the now-closed inter-Korean cooperation project sites in Kaesong and Mount Kumgang, restart military exercises and restore guard posts in border areas. On Tuesday, the North blew up a joint liaison office in Kaesong, a city just north of the Demilitarized Zone (DMZ).

Ostensibly, it is taking issue with the Moon administration's failure to stop activists here from sending balloons laden with propaganda materials across the DMZ.

North Korea watchers regard its behavior as aimed at putting pressure on Seoul to resume major joint ventures regardless of U.N.-led sanctions in place against Pyongyang.

It may be sending a message indirectly to Washington as well that it has the guts to undo the Singapore summit deal anytime and restart major provocations like an intercontinental ballistic missile test.

"Destroying the liaison office was an act of political violence, symbolizing that years of inter-Korean engagement have been reduced to rubble," said Leif-Eric Easley, associate professor of international studies at Ewha Womans University in Seoul. "North Korea ramping up troop deployments and exercises near the border will risk physical confrontation, especially after it cut off inter-Korean communication, thus increasing the possibility of miscalculation and unintended escalation."

The North's leader may be also trying to assuage the military that's apparently fed up with no progress in denuclearization talks with the U.S. and the pursuit of economic incentives from South Korea.

"If Pyongyang creates this much drama ostensibly over leaflets, imagine what it has planned in 'response' to U.S.-South Korea combined exercises this summer," Easley noted.

Cheong Seong-chang, head of the center for North Korean studies at the Sejong Institute, described the North's renewed belligerence, spearheaded by Kim's sister, as a strategic "miscalculation."

Kim Jong-un is losing his hard-won international image as a leader who practically embraces dialogue and negotiations, he said.

"The image that he is an unreliable leader who could break an agreement at anytime would rapidly spread in the international community," Cheong added.