SEOUL, June 18 (Yonhap) -- Purchases made through mobile gadgets like smartphones in South Korea reached a record high in the first quarter of the year due to the novel coronavirus pandemic, a report showed Thursday.

The total value of mobile shopping transactions reached a fresh high of 24.79 trillion won (US$20.3 billion) in the January-March period, up 280 billion won from three months earlier, according to an e-commerce report from market researcher DMC Media.

In contrast, overall online shopping purchases dropped slightly after touching a peak in the fourth quarter of last year. The value of online shopping transactions reached 36.84 trillion won in the first quarter, down from 37.41 trillion won three months earlier, the report showed. 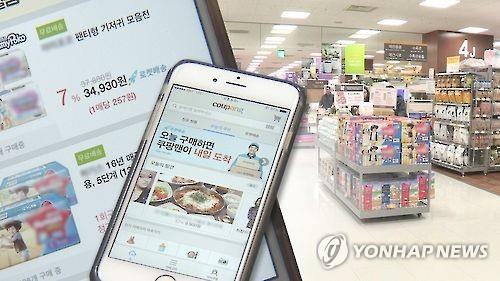 The percentage of food products out of all online shopping transactions was 12.3 percent in the first quarter, up 3.8 percentage points from three years ago.

In particular, the portion of the food delivery service nearly quadrupled from three years earlier. It accounted for 9.4 percent of online shopping transactions in the first quarter.

Due to social distancing measures sparked by the COVID-19 pandemic, online purchases for agriculture, fishery, furniture, books and automobile products in the first quarter reached their highest level in three years, the report showed.

Meanwhile, a report from market tracker Nielsen KoreaClick showed that Coupang was the most used mobile e-commerce platform in South Korea as of April.

More than 15 million consumers made their purchases on Coupang through their mobile devices, followed by 11Street with 9.88 million and Danggeun Market with 7.97 million.

Coupang was also the top online retailer in the first quarter in terms of consumer purchase value with a 24.6 percent market share, followed by Gmarket with 19.7 percent and 11Street with 15.9 percent.