SEOUL, June 18 (Yonhap) -- North Korea's official newspaper said Thursday that this week's demolition of an inter-Korean liaison office was just the beginning, warning there could be additional retaliatory steps against South Korea that could go "far beyond imagination."

North Korea has been lashing out at South Korea almost daily in recent weeks over anti-Pyongyang propaganda leaflets flown from the South. It has vowed to deal with Seoul as an enemy, cut off cross-border communication lines and even blew up a joint liaison office earlier this week.

"It is just the beginning," the Rodong Sinmun, the organ of the North's ruling party, said of Tuesday's destruction of the liaison office. "The explosive sound of justice that will continue to come out could go far beyond the imagination of those who make a noise about what could unfold."

"Our military's patience has run out," the paper added. "The military's announcement that it is mulling a detailed military action plan should be taken seriously." 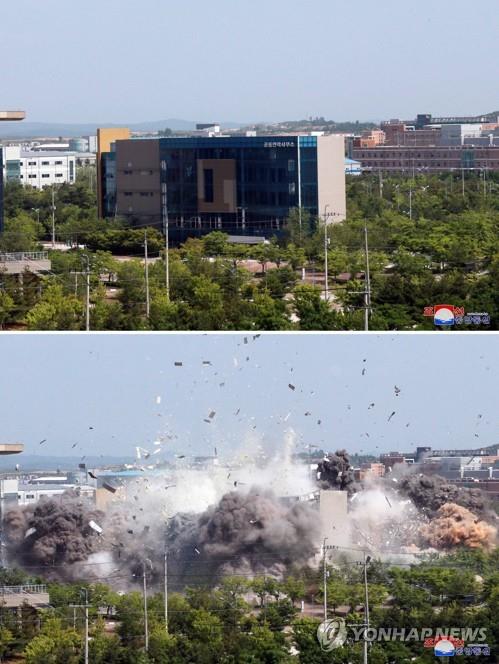 After the liaison office was destroyed, the North's military further heightened tensions Wednesday by saying that it plans to send troops to the now-shuttered joint industrial complex in the western border town of Kaesong and the Mount Kumgang tourism zone on the east coast.

The paper also said its people are ready to join large-scale campaigns of sending leaflets into what it calls a country "which is home to human scum," apparently referring to North Korean defectors who have flown anti-Pyongyang leaflets into the North.

The North, however, did not release any new official statements on Thursday morning amid concern the communist nation could be quietly preparing to carry out threatened military action, including redeploying troops to the border economic zones.

On Wednesday, an aviation tracker said that an aircraft used by North Korean leader Kim Jong-un flew from Pyongyang to the eastern part of the country, sparking speculation that he could have gone to the east coast for provocative events, such as the launching of a new ballistic missile submarine.

South Korea's military has warned the North will "pay the price" if it takes military action.

N.K. paper warns next step could go 'far beyond imagination'

N.K. paper warns next step could go 'far beyond imagination'