SEOUL, June 21 (Yonhap) -- Despite South Korea's unrelenting drive for reconciliation, North Korea is pivoting to brinkmanship tactics with its venomous rhetoric, demolition of a joint liaison office and military steps in anger over propaganda leaflets sent from the South.

The deepening Sino-U.S. rivalry is muddling the prospects of cooperation for regional stability, while U.S. President Donald Trump's focus on the new coronavirus and looming reelection battle seems to have nudged the North's nuclear quandary onto the back burner.

Seven decades after the outbreak of the Korean War, the recent developments underscore South Korea's uphill struggle for lasting peace on the Korean Peninsula, the world's last remaining vestige of the Cold War division.

Since taking office three years ago, South Korean President Moon Jae-in has hammered away at his initiative for rapprochement. But it has yielded little tangible progress in the face of recurring challenges -- cross-border distrust, convoluted geopolitics and domestic discord.

"In the border context, the contest between the U.S. and the then Soviet Union, and now the Sino-U.S. rivalry has made the Cold-War structure on the peninsula ossify," said Park Won-gon, professor of international politics at Handong Global University.

"The commingling of these factors, along with mutual distrust, domestic dissonance and not least Pyongyang's periodic provocations has been another reason why enduring peace is still far from assured," he added.

The destruction last week of the inter-Korean liaison office in the North's border city of Kaesong dealt a withering blow to Moon who is still keen on reviving the momentum for peace efforts stalled amid the deadlocked nuclear talks between Washington and Pyongyang.

Adding insult to injury, the spiteful tirade against Moon by Kim Yo-jong, the younger sister of North Korean leader Kim Jong-un, has put cross-border ties further onto a slippery slope and emboldened hawkish voices for a tougher stance against the recalcitrant regime.

The North's provocative streak came amid its deepening economic woes caused by crippling global sanctions and the COVID-19 pandemic, as well as growing frustration over the continued impasse in nuclear talks with the U.S.

The spike in tensions is now heightening uncertainty for Moon's peace efforts that once appeared to be heading to fruition with three inter-Korean summits in 2018, the unprecedented summit between the U.S. and the North in Singapore in the same year, and the dramatic encounter among the leaders of the two Koreas and the U.S. at the inter-Korean border last year. 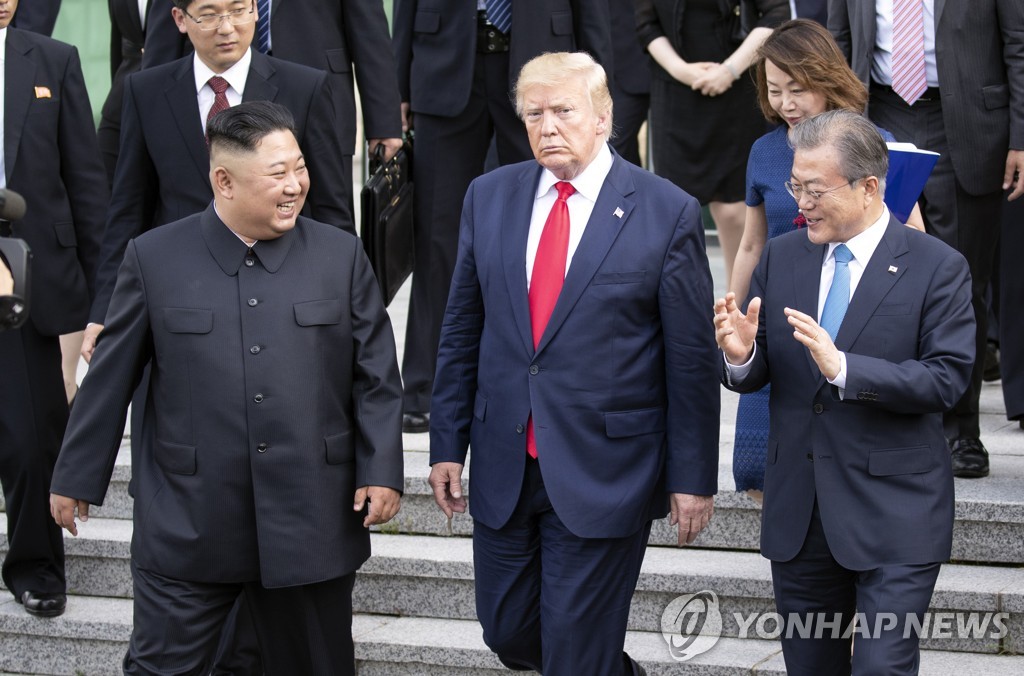 To Korea watchers, the downward spiral of relations between the two Koreas was a dispiriting sign that Moon's relatively soft approach -- a departure from his two predecessors' hard-line stance -- along with the U.S.' engagement might be proving ineffective.

"To mollify North Korea, the U.S. and South Korea have tried carrots and sticks, maximum pressure and summit diplomacy. Nothing has substantially changed the calculus of the Kim family regime. Not even the young general, Kim Jong-un," said Patrick Cronin, the Asia-Pacific security chair at the Hudson Institute.

"Seoul and Washington may aspire to peace, but the Kim family appears to want to cling to absolute power. Without a fundamental shift in at least the policy of the North Korean regime, the security dilemma of leaders and the interests of governments will remain separated by a chasm much wider than the Demilitarized Zone that still divides the two Koreas," he added.

When the armistice was signed after the three-year war, the first major armed conflict of the Cold War, no one anticipated that the temporary cessation of hostilities would last for nearly seven decades.

The armistice called for a higher level of political conference among its parties -- the U.S.-led U.N. Command, China and North Korea -- to take place within three months since the signing to discuss the "peaceful settlement of the Korean question."

The conference did occur in 1954 in Geneva, Switzerland. But they failed to bring a permanent end to the war amid differences over various issues of conflicting interests.

After the world emerged from the Cold War, South Korea started to explore a path toward inter-Korean reconciliation. But the North's pursuit of nuclear arms and longer-range missiles, as well as its military saber-rattling, hampered the efforts.

"Think about what happened between North and South Korea between May 2017 and Jan. 1, 2018. President Moon made serious efforts for reconciliation with North Korea, but the North consistently rebuffed his efforts," Bruce Bennett, a senior defense analyst at RAND Corp., said.

"Indeed, the North carried out an extensive series of missile tests and a nuclear test that created great anxiety over security in the Republic of Korea," he added.

Policy changes in South Korea, which stem in part from political polarization, have added to inter-Korean distrust. Over the last few decades, Seoul's approach to Pyongyang has oscillated from strict reciprocity to active engagement, as the government changes every five years.

Differences on how to achieve security still remain a big hurdle.

The South regards its relationship with the U.S. as the bedrock for national security though it has gradually been seeking greater autonomy in the alliance. The North, however, feels uneasy about the American military presence south of the border with adherence to its nuclear arms as a "treasured sword."

Outside the peninsula, the increasingly acrimonious rivalry between the U.S. and China over trade, technology and security is deepening concerns that the major powers could prioritize their own geopolitical interests when it comes to security on the peninsula.

"An increasingly assertive China wants to rewrite the regional balance of power and upend the longstanding security architecture," Cronin said. "Beijing wants to nullify the ROK-U.S. and Japan-US alliances, and it desires an end state of a pacified peninsula subservient to Beijing."

Despite twists and turns in peace efforts, hopes linger that South Korea's rising diplomatic stature could help it avoid the fallout of geopolitical tensions and find the momentum to rejuvenate its reconciliatory drive.

"The diplomatic conditions for South Korea are much better now than what they were at the time of the Korean War, given its diplomatic clout and national power," said Nam Chang-hee, professor of international politics at Inha University.

"I think South Korea has reached some sort of consensus now on capitalizing on its middle-power status to steer clear of the geopolitical tensions and forge ahead with the peace efforts."