SEOUL, June 18 (Yonhap) -- The Asian Development Bank (ADB) on Thursday sharply revised down its 2020 growth estimate for South Korea, along with that for the entire Asian region, expecting Asia's fourth-largest economy to shrink 1 percent from a year earlier.

The revision marks a turnaround from a 1.3 percent on-year growth forecast in April. Last year, the Korean economy expanded 2 percent.

"In a regular supplement to its annual flagship economic publication, the Asian Development Outlook 2020 released in April, ADB forecasts growth of 0.1 percent for the region in 2020. This is down from the 2.2 percent forecast in April and would be the slowest growth for the region since 1961," it said. 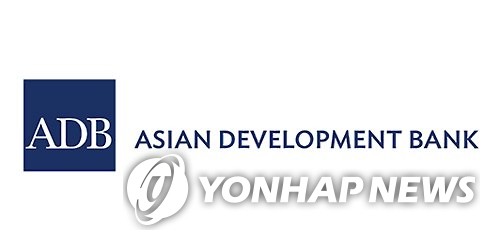 The ADB cited the new coronavirus pandemic for the slowing growth of South Korea and the rest of the region.

The ADB's downward revision for South Korea comes less than a month after the Bank of Korea (BOK) slashed its own growth projection to negative 0.2 percent growth from a 2.1 percent on-year expansion forecast in February.

The BOK, however, said the South Korean economy may shrink by as much as 1.8 percent this year should economic conditions stemming from the COVID-19 pandemic continue to worsen.

The International Monetary Fund has forecast a 1.2 percent on-year contraction for the South Korean economy.

For 2021, however, the ADB forecast the local economy to expand 3.5 percent, higher than the BOK's estimate of 3.1 percent growth under its basic case scenario.

The BOK forecast the local economy to grow by up to 3.8 percent next year under a better case scenario, but by as little as 1.6 percent under a worse case scenario.

The ADB forecast South Korea's inflation to rise 0.5 percent on-year in 2020, down from 0.9 percent forecast in April.

It expected the country's inflation to rise 1.3 percent next year, unchanged from its April forecast.