SEOUL, June 18 (Yonhap) -- For the second straight day, the Kiwoom Heroes walked off on the Lotte Giants to eke out a 3-2 victory, taking their midweek series in the Korea Baseball Organization (KBO) on Thursday.

Pinch hitter Joo Hyo-sang delivered the game-winning double in the bottom of the 10th for the Heroes at Gocheok Sky Dome in Seoul, as the home team took the rubber match after the two sides split the first two. 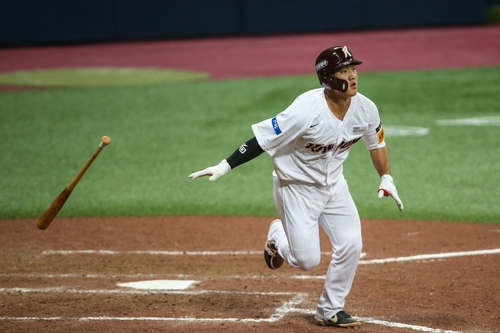 The Heroes improved to 22-17, good for third place, while the Giants dropped to 19-19 and sit in sixth place.

The Giants lost despite outhitting the Heroes 10-5, while wasting yet another strong start by Dan Straily, who entered Thursday's game having received just 1.25 runs in support per outing, the lowest among all qualified starters by nearly a run.

Straily set season highs with eight innings pitched, 12 strikeouts and 114 pitches thrown. He is 1-2 in nine starts this year, despite an impressive 2.10 ERA. Straily retired 17 straight batters in one stretch, 10 via strikeouts. He recorded at least one strikeout in each of his eight innings.

Straily allowed just three singles and two earned runs while getting his fifth consecutive no-decision. In those five starts, Straily has held opponents to four earned runs in 33 2/3 innings for a 1.07 ERA.

The Heroes scored first in the bottom second on Straily's wild pitch with men at second and third.

That came with Jeon Byung-woo at the plate, and two pitches later, Jeon hit a sacrifice fly to right field for a 2-0 lead.

The Giants grounded into double plays in the third and the fourth innings, and couldn't cash in after a one-out single in the fifth.

They finally broke through in the top sixth against Kiwoom starter Lee Seung-ho. With one out, Min Byung-hun reached on an error and stole second two batters later, with Son Ah-seop at the plate. Son then drove Min home with a sharp single to left that cut the deficit to 2-1. 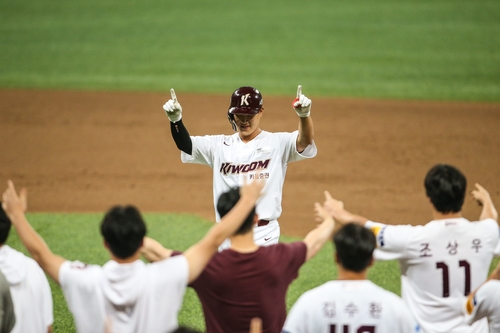 They frittered away some late opportunities. Back-to-back singles with two outs in the seventh put runners at first and second for Kim Dong-han, who swung on the first pitch and grounded into a fielder's choice.

In the eighth, facing reliever Lee Young-jun, Jeon Jun-woo got a single with one out, only to be erased by Son Ah-seop's 1-6-3 double play ball, the Giants' third twin killing of the game.

But the Giants tied the score with two outs in the ninth against reliever Kim Sang-su, who came on in place of closer Cho Sang-woo because Cho was unavailable due to a stiff neck.

After two quick outs, Dixon Machado kept the Giants' hopes alive with a double, and then An Chi-hong cashed him in with a double of his own to make it a 2-2 game.

The Heroes had a chance to end it in the bottom ninth, putting two on with one out, but cleanup Kim Ha-seong and No. 5 hitter Huh Jung-heop both flied out.

The Giants also had a man in scoring position in the top 10th after a leadoff walk and a sacrifice bunt. Jeon Jun-woo and Son Ah-seop only managed hard-hit flyouts, setting the stage for the Heroes' final rally.

After a one-out single, Joo Hyo-sang came off the bench and sent a double to deep right field against reliever Oh Hyoun-taek. Park Jeong-eum, the runner at first, stumbled as he ran past the second base bag, but recovered in time and slid home safely for the winning run.

It was Joo's first game since May 30. He was called up from the minors earlier this week after regular catcher Park Dong-won sustained a knee injury.

"It was my first game in a while, and it feels great to get such a big hit," Joo said, who has never before had a walk-off hit, either as a pro or an amateur. "I was trying to sit on a slider and got the pitch I was looking for."

Kiwoom manager Son Hyuk gave kudos to Joo for not getting overwhelmed by the moment, even though it was his first plate appearance since the call-up.

"Everyone wanted to win this one so badly in the extra innings," Son said. "I was impressed with that."

Kiwoom starter Lee Seung-ho scattered seven hits over seven solid innings of one-run ball, and his bullpen blew what would have been his first win of 2020. 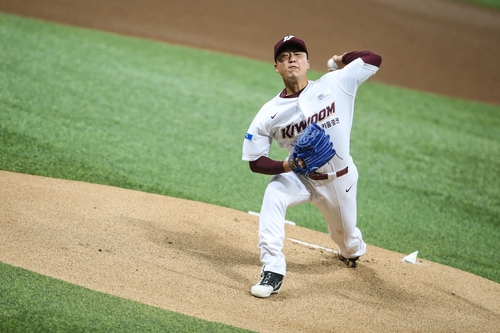