(ATTN: UPDATES with more reports on memoir in paras 8-18)
By Lee Haye-ah

WASHINGTON, June 18 (Yonhap) -- Former U.S. National Security Adviser John Bolton has written in his upcoming memoir that the 2018 diplomatic efforts to denuclearize North Korea were South Korea's "creation," more than a serious strategy on the part of Washington or Pyongyang, CNN reported Thursday.

In his book, "The Room Where It Happened," which is due to be published next week, Bolton writes extensively about his disagreements with Trump before, during and after his first summit with North Korean leader Kim Jong-un in Singapore in June 2018, according to the news channel.

"The whole diplomatic fandango was South Korea's creation," Bolton was quoted as writing, "relating more to its 'unification' agenda than serious strategy on Kim's part or ours."

Bolton also claimed that Trump was "desperate to have the meeting at any price" and that Kim had him "hooked" at the Singapore summit. 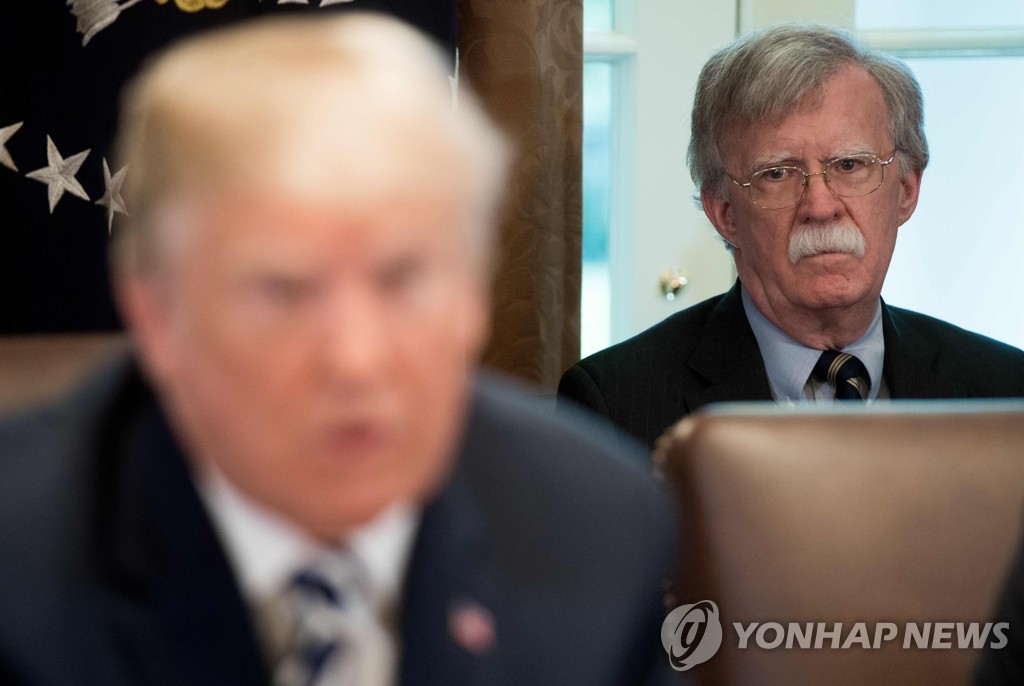 According to The New York Times, the former adviser also mocks a series of decisions by Trump. The decision to meet Kim in Singapore was a "foolish mistake," he writes, and Trump's desire to invite Kim to the White House was "a potential disaster of enormous magnitude."

In another article, The New York Times quoted Bolton as writing that Trump "spent weeks" fixated on trying to give Kim an autographed copy of Elton John's "Rocket Man" on CD.

Trump also wanted Kim to know that he used the nickname "Rocket Man" for the North Korean leader as a term of endearment, according to the paper.

According to Fox News, Bolton wrote that North Korea's short-range missile launches in May 2019 represented a violation of U.N. Security Council resolutions, but it was also "entirely possible for the launches to violate the resolutions without violating Kim's pledge to Trump, which involved only ICBM launches."

"It was equally true that Trump looked foolish for not understanding that Kim had, in effect, sold him the Brooklyn Bridge with that pledge, but we were never able to shake Trump's faith he had scored a coup in getting it," Bolton was quoted as writing.

After Bolton told reporters that there was "no doubt" of a violation, Trump made his thoughts known on Twitter, writing, "North Korea fired off some small weapons, which disturbed some of my people, and others, but not me. I have confidence that Chairman Kim will keep his promise to me, & also smiled when he called Swampman Joe Biden a low IQ individual, & worse. Perhaps that's sending me a signal?"

Bolton, however, also credited Trump on some counts.

"When Pompeo told Trump that North Korea wanted 'security guarantees' before denuclearization, Trump responded, 'This 'trust building' is horsesh--,' the smartest thing on Pyongyang he had said in months," Fox News quoted the memoir as saying. It did not state which of the three Trump-Kim meetings Bolton was referring to.

Bolton wrote that Pompeo was correct to add, "It's all an effort to weaken the sanctions, a standard delaying tactic."

Trump declared that the summit would be a "success no matter what."

"We just need to put on more sanctions, including on China for opening up the border. Kim is full of sh--, we have three hundred more sanctions we can impose on Friday," he said, according to Fox News' account of the memoir.

The book also depicted Pompeo's efforts to stop Trump from pulling U.S. troops out of various countries, including in the Middle East and the Korean Peninsula, The Washington Post reported.

"Pompeo said he feared Trump was back to leaving the Peninsula entirely," Bolton wrote of the aftermath of one summit.

Trump took to Twitter to attack Bolton over his claims.

"When Wacko John Bolton went on Deface the Nation and so stupidly said that he looked at the 'Libyan Model' for North Korea, all hell broke out," he tweeted Thursday, referring to Bolton's April 2018 interview on the CBS show, "Face the Nation."

The Libya model centers on getting North Korea to first surrender its nuclear and ballistic missile programs and then receive concessions in return.

"Kim Jong Un, who we were getting along with very well, went 'ballistic,' just like his missiles -- and rightfully so," Trump continued. "He didn't want Bolton anywhere near him. Bolton's dumbest of all statements set us back very badly with North Korea, even now.

"I asked him, 'what the hell were you thinking?'" Trump added. "He had no answer and just apologized. That was early on, I should have fired him right then & there!"

Bolton left the administration in September after clashing with Trump on multiple policy issues, including North Korea.