WASHINGTON, June 19 (Yonhap) -- Cindy Warmbier, the mother of an American college student who died after being held in North Korea, renewed her resolve on Friday to increase pressure on the Pyongyang regime.

On the third anniversary of her son Otto's death, Warmbier spoke from her Cincinnati, Ohio, home about the legacy of her "hero" and the guilt she still feels over letting him travel to North Korea in 2016.

But her message to the world was clear: North Korea must be held accountable for its brutalities.

"Keep the pressure on. Do everything you can. Let's expose as much illegal activity as we can. Reach out to me, anybody that knows an asset I can go after," the mother of three said during a virtual seminar hosted by the nongovernmental Committee for Human Rights in North Korea.

"Every little thing I can do, I want to do. And every little thing you can do, it may not seem like much, but it adds up and it adds pressure and anytime we can talk about -- not the nuclear, because they love us talking about the nuclear because that makes them feel powerful -- but talking about how -- I'm going to say it -- how shitty they are, is going to help because that embarrasses them and they are just the worst, this regime," she said. 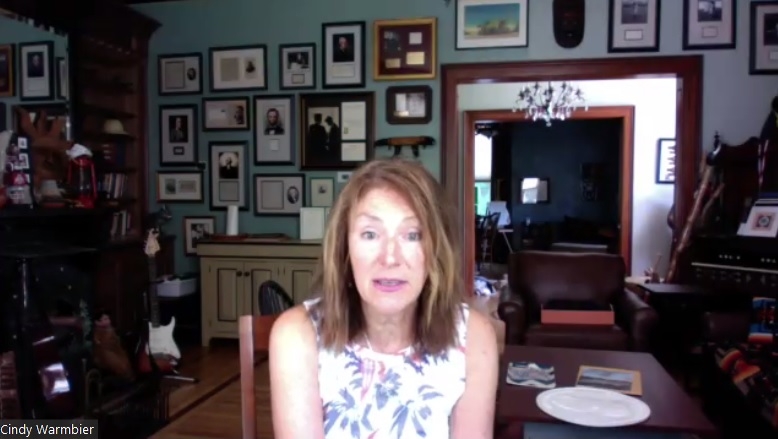 Otto, then 22, was on a group tour in Pyongyang in January 2016 when he was detained by authorities for allegedly stealing a propaganda poster from his hotel.

He was sentenced to 15 years' imprisonment with hard labor, but later fell into a coma and never regained consciousness until his release in June 2017. Six days after he was flown home, Otto died.

Recalling her own upbringing as a Jew, Cindy Warmbier said she knew her background could affect the way people treated her.

"They would maybe say something bad or look down on me," she said. "I didn't expect that as an American, that would happen to Otto."

"There are people that hate Americans," she added. "This regime hates us. So how can we act like they're our friggin' friend? They hate us. They enjoyed killing Otto. They kept him for over a year in a vegetative state because they were scared to send him home. And the only reason they did was because Trump, really, Trump, as much as he's done that I'm mad at, I don't know that anyone else could have gotten Otto home."

Cindy and her husband, Fred, have lobbied hard to win support for their cause to raise awareness of North Korea's human rights abuses and bring the regime to justice.

The resolution condemns the North Korean government, holding it responsible for the "unjustified arrest, mistreatment, and death" of Otto Warmbier.

It also calls on the U.S. government to continue to condemn North Korea's human rights violations at the United Nations and fully enforce sanctions on Pyongyang until it agrees to negotiations on "permanently and verifiably limiting North Korea's weapons of mass destruction and ballistic missile programs."