SEOUL, June 21 (Yonhap) -- South Korea reported 48 new cases of the coronavirus Sunday, down 19 from a day earlier thanks to a fall in imported cases, but local infections rose amid a continuing spread of the virus in the Seoul metropolitan area and the central city of Daejeon.

The new COVID-19 cases, 40 of them local infections and eight imported cases, raised the total caseload to 12,421, according to the Korea Centers for Disease Control and Prevention (KCDC).

The tally marked a fall from 67 additional cases reported Saturday.

The Seoul metropolitan area accounted for most of the newly added virus cases this month.

Of the locally transmitted cases, 27 were reported in the densely populated Seoul and nearby metropolitan areas, where around half of the country's 50-million population lives. 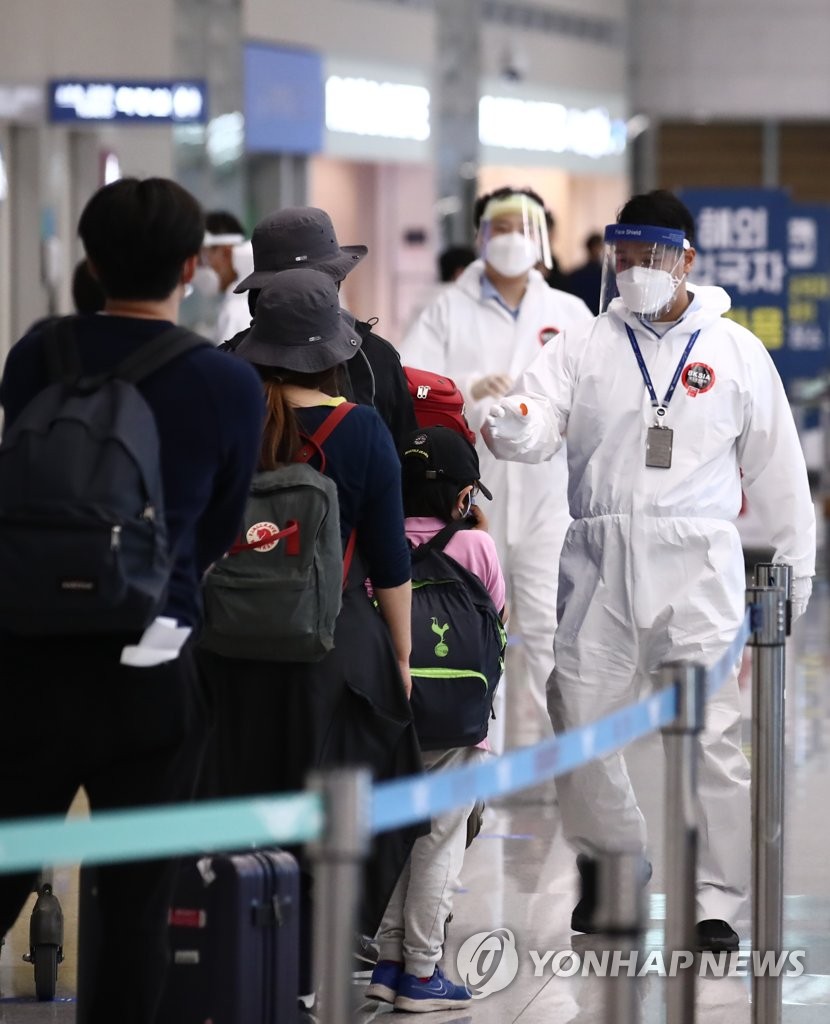 Ten cases were reported in Daejeon, some 160 km south of Seoul, triggering concerns that a community spread may further accelerate outside the greater Seoul area.

That brought the number of coronavirus cases confirmed in and around Daejeon for the past week to 45.

In particular, the city of Daejeon has emerged as a concern, as many infections have been linked to a door-to-door sales company there. The Daejeon city government has since banned such door-to-door sales activities to prevent the virus from spreading.

In Seoul, 480 coronavirus patients remained hospitalized as of Sunday, maintaining the upward trend of the number of uncured patients since early May. That raised concerns that the number of hospital beds for seriously ill patients could fall short.

The country reported eight additional imported cases, raising the total number of such cases to 1,435.

Amid the rising community infections, the average number of daily new virus cases marked 46.7 over the recent two weeks, up from 39.6 per day two weeks earlier, according to quarantine authorities.

New imported cases also rose to 9.9 per day over the two-week period, up 3.9 from two weeks ago.

Out of 654 people who tested positive for the coronavirus in the recent two weeks, the transmission routes of 69 patients, or 10.6 percent, remained unclear, up from 8.1 percent two weeks earlier.

Also, the number of COVID-19 patients aged 50 or over accounted for 50 percent of the total new cases in the third week of June, up from 11.7 percent a week earlier. Consequently, the number of critically ill patients with the new coronavirus soared to 34 as of Saturday from eight on June 2.

Due to a fresh rise in daily new cases in the Seoul metropolitan area, the country had imposed two weeks of tougher infection preventive measures in late May until June 14.

There were no additional deaths, keeping the total death toll at 280.

The total number of people released from quarantine after full recoveries stood at 10,868, up 12 from the previous day.

These facilities will be required to carry out new obligations starting Tuesday morning.

Chung also expressed worries about a recent increase in imported cases, saying the government should consider temporarily strengthening visa and other entry restrictions for countries whose entrants have been found to have a higher risk of the virus than other nations.

As precautionary measures, South Korea will restrict issuing visas to people from Pakistan and Bangladesh and temporarily not permit non-scheduled flights between South Korea and those countries, starting from Tuesday.

Foreigners with non-professional employment (E-9) visas will be banned from entering the country if they do not secure proper facilities for a two-week self quarantine.

The Central Clinical Commission, a government-organized task force of doctors and other medical experts, officially advised the use of remdesivir, an Ebola drug developed by U.S. pharmaceutical giant Gilead Sciences Inc., for coronavirus treatment.

But the commission decided not to recommend the use of chloroquine and hydroxychloroquine, medications used to prevent and treat malaria, while advising that the use of kaletra, a medication for the treatment and prevention of human immunodeficiency virus (HIV) and acquired immunodeficiency syndrome (AIDS), should be cautiously decided.

The commission also recommended lowering the hospitalization period for coronavirus patients with minor symptoms so as to make more beds available for serious cases.

The commission made the recommendation after scrutinizing clinical data of a total of 3,060 coronavirus patients, saying those with lighter symptoms can be released from hospital early for at-home treatment to allow serious cases to be hospitalized.