SEOUL, June 22 (Yonhap) -- This week began with a hot spell across the nation, with the season's highest temperature recorded in Seoul, meteorologists said.

According to the Korea Meteorological Administration (KMA), Seoul's daytime high soared to 35.4 C, the fifth highest temperature on record for late June.

This year's previous daily high of 33.5 C for Seoul was recorded on June 13. According to the KMA, Seoul's temperature topped the June 13 reading by reaching 33.7 C at 2 p.m. 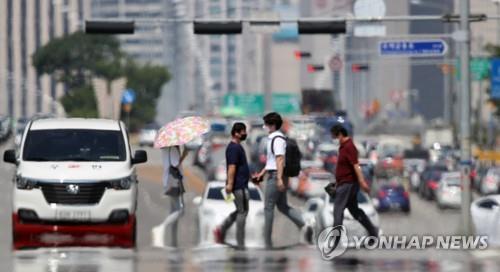 "Heat has accumulated over Seoul due to extended clear weather in recent days. In addition, strong sunlight further pushed up the temperature," a KMA official said.

"There has been less wind in the center of the high pressure in the central regions, adding to the heat wave."

A heat wave advisory has already been issued for Daejeon, Sejong and almost all inland areas of Gyeonggi, Gangwon, Chungcheong, North Jeolla and North Gyeongsang provinces.

A heat wave advisory is issued when the daytime high is projected to exceed 33 C for more than two days, or damage is expected due to prolonged hot weather. The KMA earlier forecast the number of heat wave days will double this summer from the 30-year average.

According to the KMA, the latest hot spell will continue until Tuesday, as rain is forecast nationwide from Wednesday to Friday. On Sunday, rain is also forecast for the southwestern provinces of Jeolla and Jeju Island.