In "The Room Where It Happened," set to be published Tuesday, Bolton recalled an Afghanistan-related meeting that took place last August ahead of the start of Special Measures Agreement negotiations between South Korea and the United States.

"Get out of there if we don't get the five billion-dollar deal (for South Korean support of U.S. bases)," Trump was quoted as saying. "We lose $38 billion in trade in Korea. Let's get out."

Trump's initial demand for $5 billion has been widely reported as the two countries remain deadlocked over how much Seoul should pay for the upkeep of 28,500 American troops stationed on the peninsula.

Trump's recent decision to reduce troop levels in Germany has led to speculation he may do something similar in South Korea. 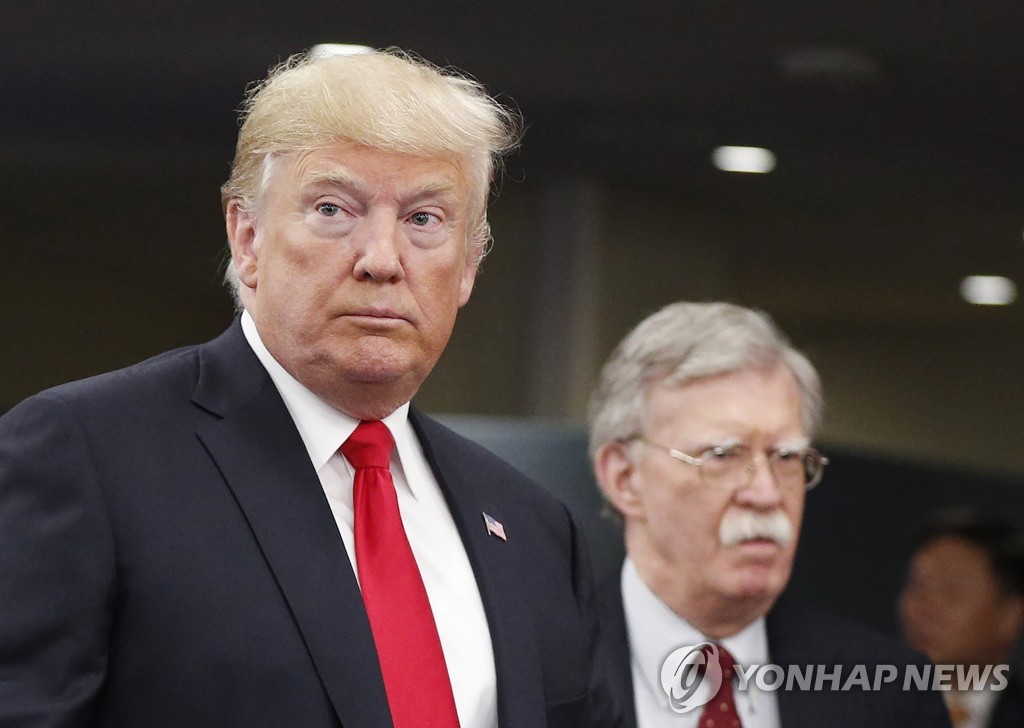 At the meeting, Trump also called the "war games" with South Korea a "big mistake," referring to the allies' combined military exercises.

"You shouldn't have let them go on," Bolton quoted Trump as telling him. "I'm trying to make peace with a psycho," he added of North Korean leader Kim Jong-un.

The military exercises have long angered Pyongyang, which views them as dress rehearsals for an invasion of the regime.

After his first meeting with Kim in Singapore in June 2018, Trump announced that he was scaling back some of the exercises to facilitate denuclearization negotiations with the North.

After asking at the meeting when the August exercises were scheduled to end, he said, "End them in two days; don't extend them even for a day," Bolton wrote.

At a separate meeting after Bolton returned from a trip to Japan and South Korea in July, Trump repeated the threat.

"(H)e said, as he did more and more frequently, that the way to get the $8 and $5 billion annual payments, respectively, was to threaten to withdraw all U.S. forces," Bolton wrote. "'That puts you in a very strong bargaining position,' said Trump."

In a phone call with Secretary of State Mike Pompeo following the latter's trip to Pyongyang in July 2018, Trump made his disdain for the U.S. troop presence clear.

"We're going to end being chumps," Bolton quoted him as saying.

"Trump was off riffing that he didn't understand why we had fought the Korean War and why we still had so many troops on the Peninsula, not to mention those war games," he added.