The Ministry of Food and Drug Safety said it has inspected a total of 1,417 offline food import businesses in the country since October 2019 and found no breaches of the law over meat imports.

Prior to the inspections, there were a total of 43 violations between August 2018 and September last year.

South Korea reported its first ASF case in August last year. The country has been cracking down on illegal meat imports since August 2018, when China identified its first case of the animal disease. 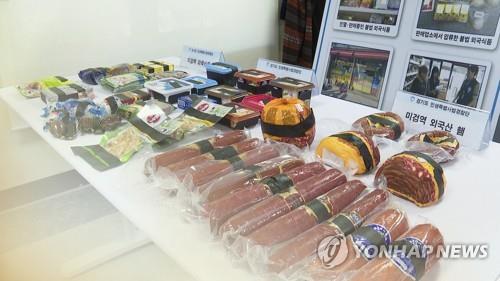 According to the drug safety agency, there were some 218 breaches involving online business entities in the first half of the year, also down sharply from 597 tallied a year earlier and 1,060 in the second half of last year.

So far, South Korea has reported some 640 ASF cases, with almost all being found near the inter-Korean border with North Korea. The North reported its first outbreak in May 2019.

The animal disease does not affect humans but is deadly to pigs and can wreck havoc on the local livestock sector. There are currently no vaccines nor cures for the disease.