In his memoir, "The Room Where It Happened," set to be published Tuesday, Bolton recalled the conversations that took place behind the scenes during Trump and Kim's second summit that ultimately ended abruptly without any agreement.

On the first day, Feb. 28, Trump asked Bolton for the briefing material that explained the meaning of "denuclearization" and North Korea's "bright future," according to the former adviser.

"He handed both pages to Kim, and offered to fly him back to North Korea, canceling his evening in Hanoi," Bolton recalled. "Kim laughed and said he couldn't do that, but Trump observed happily that that would be quite a picture." 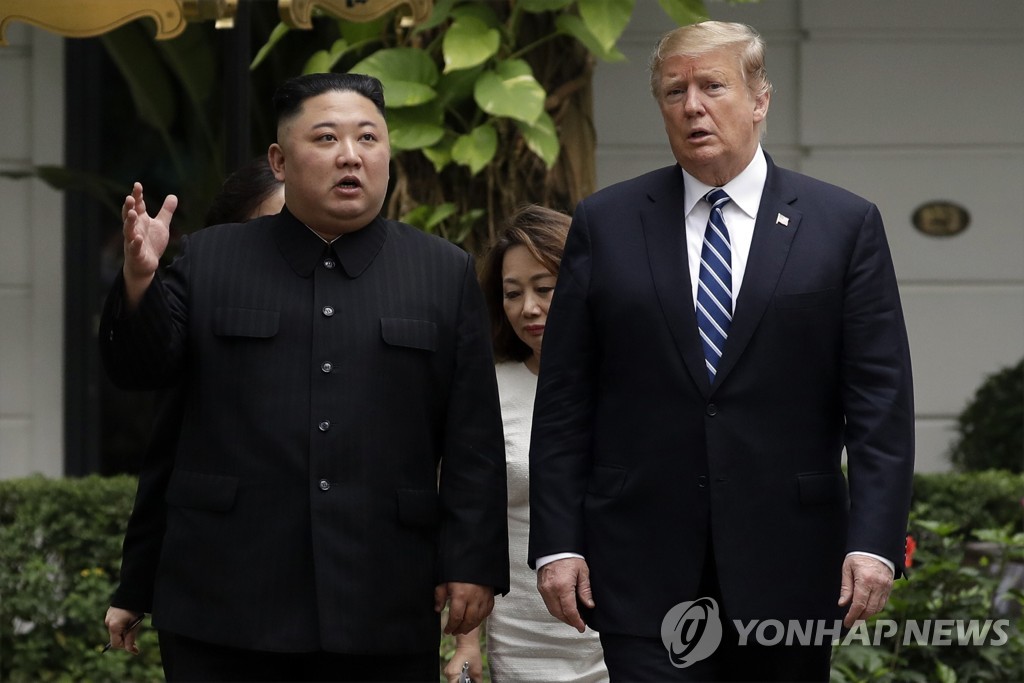 Kim famously took an armored private train from North Korea to Hanoi for the second summit and returned home aboard the same train.

During the course of their meeting, Trump asked Kim what North Korea could add to its offer of dismantling its main nuclear complex at Yongbyon, saying, "He knew Kim didn't want him to look bad because he was the only one on Kim's side," Bolton wrote.

"Kim readily returned the compliment, since he was the only one on Trump's side," he said.

Trump repeatedly called for more concessions from the North, suggesting Kim offer to eliminate his long-range missiles capable of hitting the United States.

Turning to Bolton, Trump asked for his thoughts, and Bolton jumped in to demand a full declaration of North Korea's nuclear, chemical, biological and ballistic missile programs.

"Kim wasn't buying, urging that if we went step by step, that would ultimately bring us a comprehensive picture," Bolton wrote.

Kim went further to complain that North Korea had no legal guarantees to safeguard its security. When Trump asked what kind of guarantees the North wanted, Kim replied that there are no diplomatic relations, 70 years of hostility and eight months of personal relations.

"What would happen if a U.S. warship entered North Korea territorial waters? he asked, and Trump suggested Kim call him," Bolton recalled.

The North Korean leader sought to emphasize the significance of giving up Yongbyon, pointing to U.S. media's coverage of the idea.

"Trump asked again if Kim could add something to his offer, such as asking only for a percentage reduction in the sanctions rather than completely removing them. This was beyond doubt the worst moment of the meeting," Bolton wrote.

"If Kim Jong Un had said yes there, they might have had a deal, disastrously for America. Fortunately, he wasn't biting, saying he was getting nothing, omitting any mention of the sanctions being lifted," he added.

As the two sides wrangled over how to draw up their closing statements, Kim insisted on a joint statement, while Trump changed his mind after initially wanting separate statements, according to Bolton.

"Trump interjected emphatically that if we accepted Kim's proposal, the political impact in the United States would be huge, and he could lose the election," Bolton recalled, referring to North Korea's offer to dismantle only Yongbyon in exchange for sweeping sanctions relief. "Kim reacted quickly, saying he didn't want Trump to do anything that would harm him politically."

Bolton added: "Kim kept pushing for a joint statement, but lamented that he felt a barrier between the two leaders, and felt a sense of despair. Kim was smartly playing on Trump's emotions, and I worried it might work. Trump said Kim shouldn't feel that way, and then, fortunately, we all laughed."

Trump offered to fly Kim back to N. Korea from Vietnam: Bolton memoir

Trump offered to fly Kim back to N. Korea from Vietnam: Bolton memoir