The communist country is preparing to release some 3,000 balloons carrying around 12 million propaganda leaflets to the South, according to the North's Korean Central News Agency, in a tit-for-tat for Seoul's failure to stop defectors from sending anti-Pyongyang leaflets.

"We are closely monitoring moves by the North Korean military regarding the leafleting round-the-clock. In preparations for diverse possibilities, we maintain a firm readiness posture," Col. Kim Jun-rak, spokesperson of the South's Joint Chiefs of Staff (JCS), told a regular press briefing.

North Korea did not elaborate on when and how it would send the leaflets, but it could employ drones and other unmanned aerial vehicles to fly them. Some raise the likelihood of the North distributing them at sea from vessels.

"If North Korea uses drones, for example, in violation of the inter-Korean military agreement, we will be forced to take a corresponding military action," an official of the Joint Chiefs of Staff said.

Under the Comprehensive Military Agreement signed on Sept. 19, 2018, the two Koreas set up the no-fly zone along the inter-Korean border. But Pyongyang has threatened to nullify the pact and halt other joint projects.

During the parliamentary committee meeting, Minister Jeong Kyeong-doo also noted that the authorities keep close tabs on the North's related movements, and any possible military responses to the leafleting "would depend on what methods North Korea will use and how it acts." 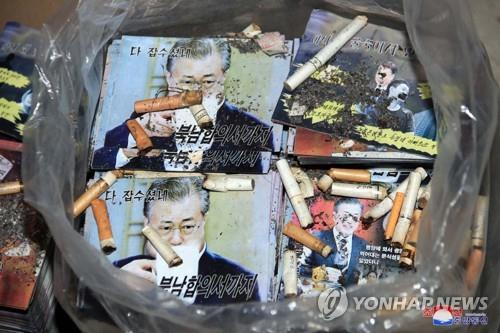