SEOUL, June 22 (Yonhap) -- The Air Force is planning to put the advanced unmanned aircraft Global Hawk into operational deployment as early as next month, with the fourth and last unit to arrive here soon, sources said Monday.

Under a 2011 deal with the United States, South Korea bought four RQ-4 Block 30 Global Hawk Remotely Piloted Aircraft (RPA) and has so far brought in three units, with the first one arriving here in December last year.

"We are going to field Global Hawk for actual operations within the second half of this year. They will be put into service after the one remaining unit arrives here, which will take place soon," a military source said.

The Air Force squadron in charge of the advanced asset is carrying out flight training for the official deployment, the source said, adding that no events to mark its official deployment will be held as it is one of the military's "key strategic assets."

Another source said that the Air Force is eyeing "around the end of October or early November as a target time frame, but the deployment could be made earlier as North Korea is planning a large event in October."

The communist country is working to hold a large-scale military parade to mark the 75th anniversary of the founding of the ruling Workers' Party, according to the defense ministry. The day falls on Oct. 10.

Earlier in the day, local media reported that the Air Force flew the aircraft as part of the country's stepped-up surveillance of North Korea in the wake of Pyongyang's threats of military action, but the Air Force denied the report as untrue.

"It is not true that Global Hawk undertook any surveillance operations today. Today's flight is part of ongoing training programs," an Air Force officer said. "We are working to deploy the asset normally."

Pyongyang has warned of flying anti-Seoul leaflets in retaliation for Seoul's failure to stop defectors from sending anti-regime leaflets across the border, forward deploying troops in front-line areas and halting other joint projects. Last week, it blew up the liaison office building in the border town of Kaesong.

The communist country has bristled at Seoul's introduction of advanced assets and vowed to take countermeasures. 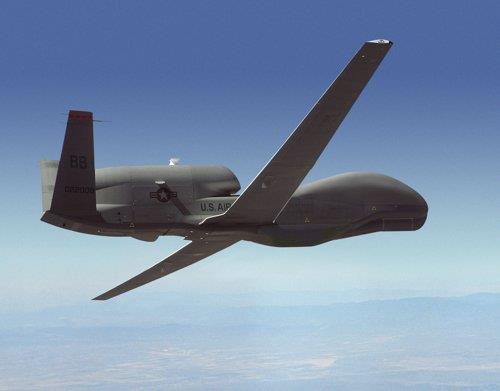