SEOUL, June 22 (Yonhap) -- North Korea is reinstalling propaganda loudspeakers in regions along the inter-Korean border after removing them under a 2018 summit agreement with South Korea, military officials said Monday.

After the summit between President Moon Jae-in and North Korean leader Kim Jong-un on April 27, 2018, the two Koreas agreed to halt all hostile acts against each other and eliminate their means, including broadcasting through loudspeakers and distribution of leaflets.

According to the authorities, North Korea has been detected setting up loudspeakers again "in multiple places" inside the Demilitarized Zone (DMZ) from around Sunday. It had dismantled dozens of loudspeakers in around 40 areas near the tense border in a first action to follow up on the Panmunjom Declaration.

"Such moves were spotted in more than 10 regions, which have taken place simultaneously," an official of the Joint Chiefs of Staff said.

"We are closely monitoring the North's military moves," the defense ministry said. "We are fully ready to immediately respond to various possibilities."

South Korea, in response, is also reviewing the option of restoring its loudspeakers. The South removed its loudspeaker broadcast equipment installed in around 40 front-line areas, including the border town of Paju, in May 2018 in accordance with the agreement.

The communist country has threatened to launch anti-South leaflets and to implement other actions against what it called "the enemy" in protest over Seoul's failure to stop defectors from conducting anti-regime propaganda leaflet campaigns.

Last week, it blew up the inter-Korean liaison office in the border town of Kaesong, a symbol of reconciliation between the two Koreas and a key achievement of the summit declaration. 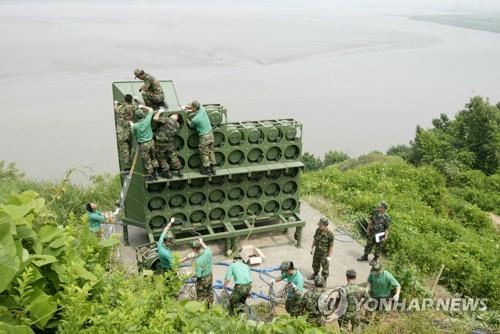