SEOUL, June 23 (Yonhap) -- A North Korean propaganda outlet claimed Tuesday that the remains of a legendary Korean independence fighter, which South Korea has been seeking to bring to Seoul from Kazakhstan, should be brought to his hometown of Pyongyang.

Hong Beom-do was a general commander of the Korean independence army during the 1910-45 Japanese colonial rule who claimed victories in battles against Japanese forces in Manchuria, including the Battle of Fengwudong in 1920. He died in Kazakhstan in 1943 and is still buried there.

During his visit to Kazakhstan in April 2019, South Korean President Moon Jae-in told Kazakh President Kassym-Jomart Tokayev that he hoped to repatriate Hong's remains. South Korea has since been in talks with Kazakhstan to bring home his remains.

"All of our people, including from the North and South and around the world, will agree that his remains must be buried in his hometown Pyongyang," Uriminzokkiri, one of the North's propaganda websites, said Tuesday.

"The Kazakh government also promised us it would hand over the remains of Hong Beom-do after the reunification of the two Koreas," it added.

The website slammed South Korean authorities, saying the move to bring back his remains is "another provocation and an inhumane act that ignores our ancestral tradition as well as international practice."

"We will not overlook South Korea's scheme to bring back his remains. They will clearly face the consequences," the website said. 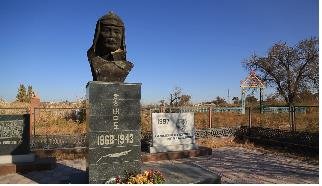