SEOUL, June 23 (Yonhap) -- A group of North Korean defectors in the South said Tuesday it sent leaflets into North Korea overnight from the western border city of Paju.

One of the plastic balloons used for sending the leaflets was found in a town in the mountainous eastern province of Gangwon, according to local police.

The government said no balloons appear to have managed to cross the border, considering the direction of wind and other circumstances.

"(We) sent anti-North Korea leaflets over (to the North) between 11 p.m. and midnight on Monday (from a town) in Paju," Park Sang-hak, chief of Fighters for a Free North Korea, said. The group picked a very dark location to avoid police surveillance, he added.

According to Park, six members of the group, which has been active in anti-North Korea leafleting, sent to the North around 500,000 leaflets carried by 20 large helium balloons.

Some 500 pamphlets depicting South Korea's success story, 2,000 American one-dollar bills and 1,000 SD cards were also flown to the North, along with the leaflets, he said.

The covert operation by the group came as the police were keeping watch around-the-clock along the border, a move aimed at blocking any anti-North leafleting by activists and defectors amid escalating inter-Korean tensions over the issue.

Taking issue with such leafleting campaigns in the South, North Korea made a series of inflammatory remarks toward South Korea and President Moon Jae-in in recent weeks.

At least one of the balloons, flown by defectors in South Korea on Monday, was found on a hill in Hongcheon, a South Korean county located nearly 100 kilometers southeast of Paju, on Tuesday morning, police said.

"We went to the scene upon receiving a call from a resident that a plastic ballon presumed to be in use for anti-North Korean leafleting was hanging from a tree," a police officer said. "We understand the balloon was floated by a defector group last night."

An image of the balloon showed that it was carrying images of North Korea's ruling Kim family members, including the current leader Kim Jong-un and his younger sister Yo-jong, as well as bundles of leaflets. 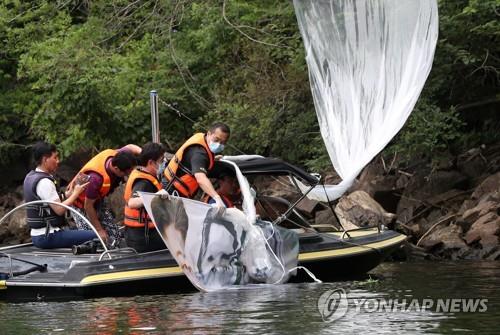 The unification ministry rebutted Park's claim, saying no leaflets seem to have flown into the North, taking various factors into account, such as weather conditions.

Park had bought only enough helium gas to float one balloon and one-dollar bills and SD cards were not found in the plastic balloon that police retrieved in Hongcheon, the ministry said.

"The government will take strict measures against Park, who has threatened the life and safety of the people living in the border areas and heightened inter-Korean tensions by continuously attempting to fly anti-North Korea leaflets and materials and spreading false information," the ministry said.

Earlier in the day, the ministry called for a halt to such leaflet campaigns.

"Leaflets, whether from the North or the South, do no good for inter-Korean relations, and the two leaders agreed in the Panmunjom Declaration to stop the leafleting," a ministry official said, referring to a 2018 summit agreement between President Moon Jae-in and North Korean leader Kim Jong-un.

"From this point of view, the government believes that the unproductive distribution of leaflets must be immediately halted to improve inter-Korean relations and promote peace on the Korean peninsula," the official said.