SEOUL, June 23 (Yonhap) -- Contrite over his past drunk driving arrests, former major leaguer Kang Jung-ho apologized for his actions Tuesday in his bid for a return to the South Korean league.

"I know that no word can ever wash away the things I did, and I deeply regret my wrongdoing," Kang said at the start of a press conference at a Seoul hotel. It was his first public appearance since returning from the United States on June 5. He spent the next 14 days in government-mandated quarantine amid the coronavirus pandemic.

"I've thought long and hard about whether I deserve to play baseball in South Korea," Kang said. "And I've decided I really want to show baseball fans that I am truly sorry for what I did." 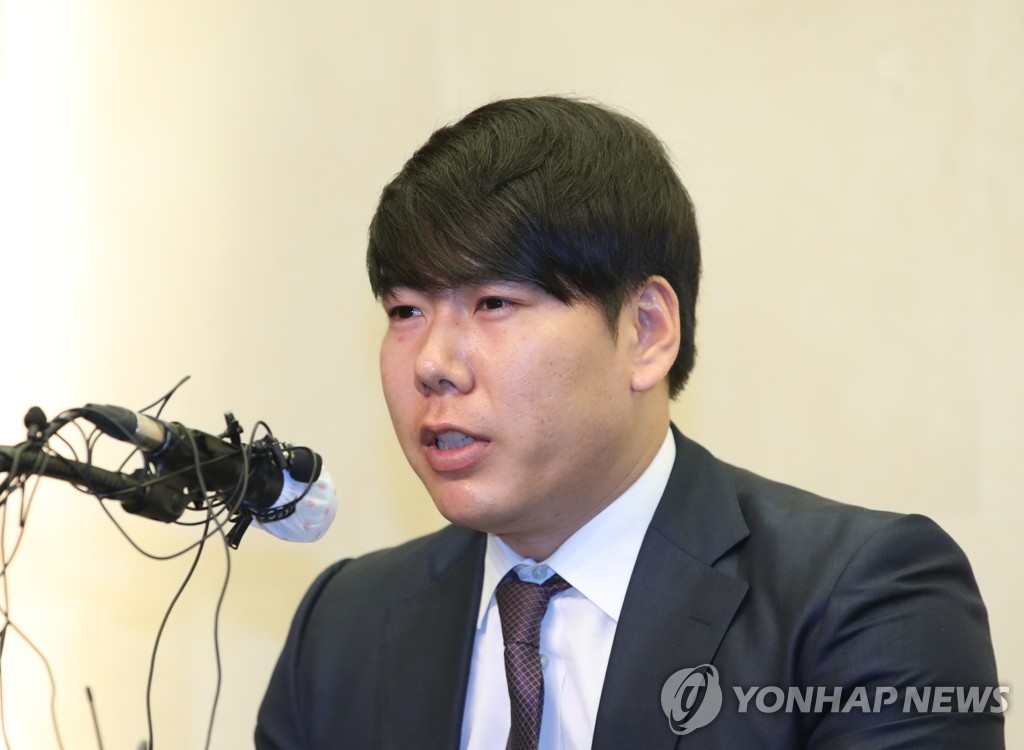 Kang, whose five-year stint with the Pittsburgh Pirates ended unceremoniously with a release last August, is hoping to be reunited with the Kiwoom Heroes, the last Korea Baseball Organization (KBO) team he played for before leaving for the big leagues in 2015.

Because Kang wasn't a free agent then and went through the posting system to land his first major league deal, the Heroes still own rights to Kang and must first activate him from the "voluntarily retired" list before he can play in the KBO again. Once Kang comes off the list, the Heroes can either sign him or trade him.

Based on Kang's three drunk driving cases from 2009, 2011 and 2016, the KBO handed down a one-year suspension on the infielder on May 25, along with 300 hours of community service. The ban will take effect once Kang signs a KBO deal. Assuming Kang lands a deal this year, he will be 34 when the suspension ends.

If the Heroes choose not to activate him from the list, Kang won't be able to play for another team in the KBO, but he will still be eligible to sign overseas. Kang hinted that he likely won't pursue any deal outside South Korea, saying he feels this will be his last crack at resuming his playing career. 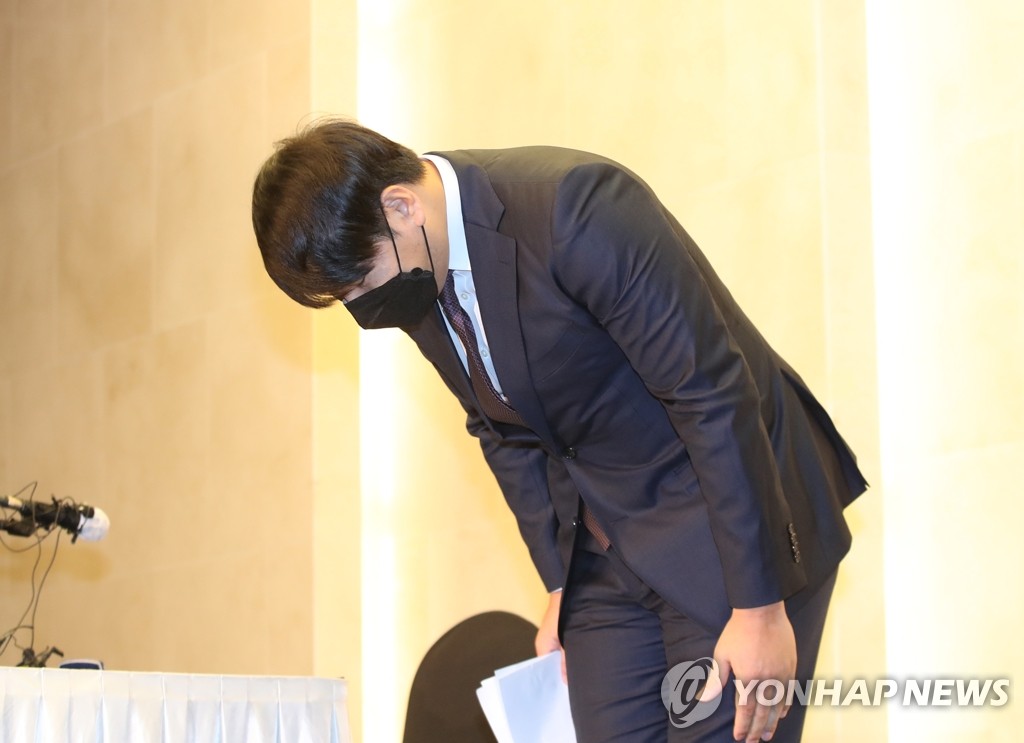 Kang, who has previously issued an apology over his past behavior in a statement through his agency, didn't speak to reporters after arriving at Incheon International Airport on June 5. The press conference was Kang's first opportunity to address his checkered past in his own voice since the KBO issued the suspension.

"If I am ever given a chance to play in Korea again, I'll donate the entire salary for my first season to help victims of drunk driving accidents," Kang said. "I'll join the campaign against drunk driving, and I'll continue to give back to the community until I retire."

Kang has been grilled in the court of public opinion over his attempt to return, with detractors saying that if Kang were truly contrite, then he should pay the price by not playing baseball at all.

Kang said he was aware of the criticism he has faced and will continue to face, if he signs a KBO deal.

"I'm trying to become a more mature person, and I'm prepared to accept whatever blame that comes my way," Kang said. "I am hoping that if I sincerely ask fans for their forgiveness, then they'll eventually change their mind."

Kang said he'll also humbly accept any additional punishment from the Heroes if they decide to sign him.

"The purpose of my return isn't simply to play good baseball; I want to show people that I've changed," Kang added. "I wanted to help out children and youths."

Kang added he'd been working with children for quite some time, but he chose not to make those occasions public because he was too embarrassed to do so due to his checkered past off the field.

Asked what specifically he can tell children, Kang said he'd like to share his experience with them.

"I would tell them they should never forget where they come from," he said. "As a kid, I heard a lot about the importance of character. But after a few years of playing pro ball, I became arrogant and selfish. I want to become a better man." 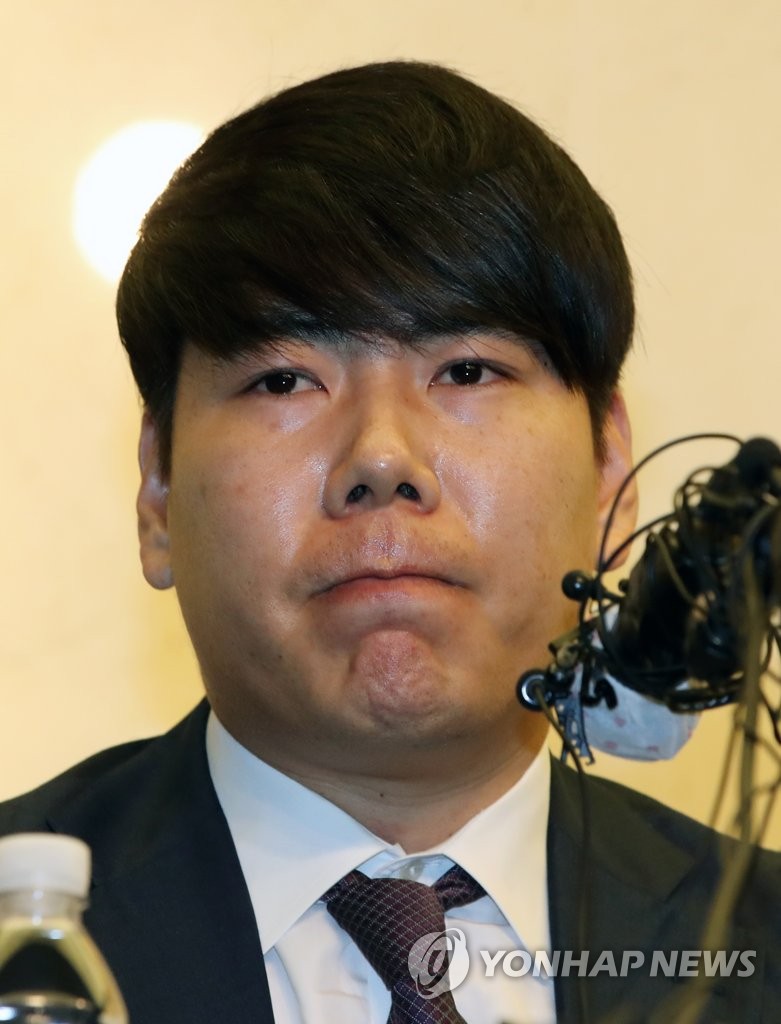 In December 2016, Kang drove into a guardrail in Seoul while under the influence and then fled the scene. He received a suspended jail term for that offense in 2017.

It later turned out to be Kang's third drunk driving case, and it effectively ended Kang's once-promising big league career.

Kang came under fire in 2017 when, in response to the sentencing, he offered to atone for his mistakes by playing good baseball. His critics considered it a non-apology and wondered if Kang was really remorseful.

"I was foolish and selfish at the time. I looked at things only from a baseball perspective," Kang said. "Then I met a missionary in the Dominican Republic (while playing winter ball), and I had a chance to look deeper into myself. I am different now."