SEOUL, June 23 (Yonhap) -- Cash-squeezed Doosan Group will focus on its clean energy-related business while selling off others, such as its power plant construction business, in return for financial assistance from its creditors, industry sources said Tuesday.

State-run banks the Korea Development Bank and the Export-Import Bank of Korea injected 3.6 trillion won (US$2.95 billion) into the group to keep it afloat between March and June, as the group drew up a 3 trillion-won self-rescue plan. 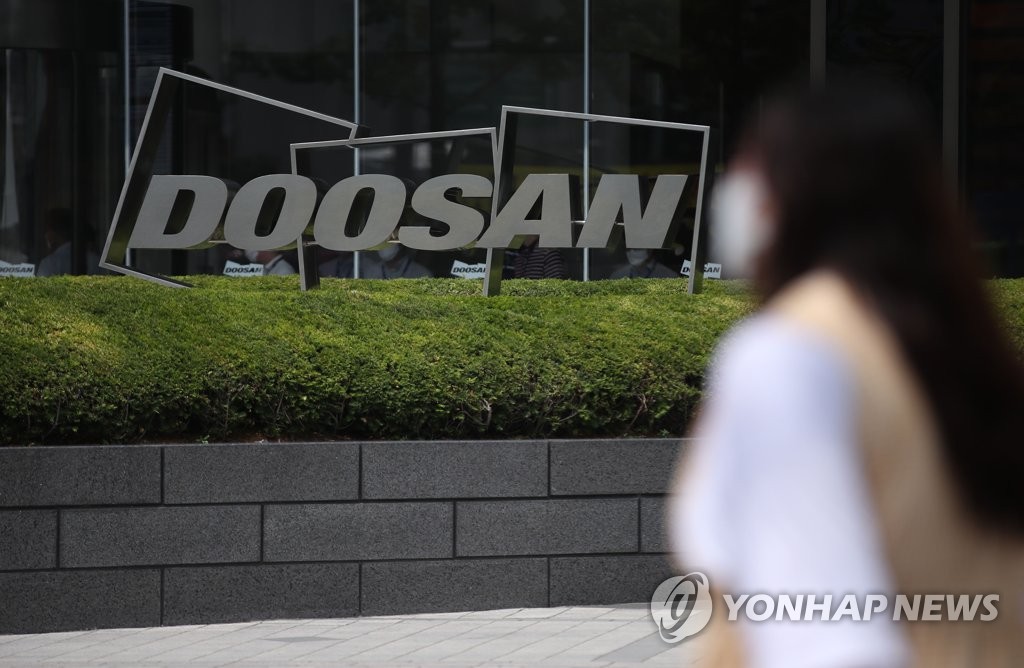 As of the end of 2019, Doosan Group, the 15th-largest conglomerate, had a total of 25 affiliates under its wing, including Doosan Infracore Co. and Doosan Fuel Cell Co., with its business portfolio ranging from power plant construction to chemicals.

The business group has been seeking to sell assets to tide over cash shortages caused by a lack of orders at its power plant affiliate Doosan Heavy Industries & Construction Co. and extended losses at its construction unit Doosan Engineering & Construction Co.

Under the business restructuring plan, Doosan Heavy, the group's flagship, has pushed ahead with its scheme to shift its mainstay coal and nuclear power plant business toward its renewable energy business.

Doosan Heavy will increase its presence in such areas as offshore wind power plants and energy storage systems, as well as make inroads into the tidal power, solar power and other energy sectors.

Oil pressure machine maker Doosan Mottrol has already been put up for sale, but Doosan Mobility Innovation, a producer of portable fuel cell powerpacks for drones will not be included in the asset sale, according to an official at KDB. The two are business units under Doosan Corp., the group's holding company.

On the asset sales list were Doosan Infracore, the group's headquarters building, a golf course and other non-core assets.

Doosan Fuel Cell, a fuel cell manufacturer, is likely to be off the list.

The group may not sell advertising agency Oricom Inc., a professional baseball team, the Doosan Bears, and Doosan Bobcat, a maker of small-sized construction equipment and also the group's cash cow.

Doosan Group will be pressured to sell Doosan Bobcat if its asset sales plan does not go smoothly, the sources said.

But Doosan Heavy's shift toward the renewable energy sector may hurt its financial status, as it may take a few years to make a splash in the sector amid its reduced presence in the nuclear and coal power plant sector.

It is unclear whether Doosan Heavy will be able to expand its presence in the gas turbine market, where General Electric Co., Siemens AG. and Mitsubishi Hitachi Power Systems are competing.