SEOUL, June 23 (Yonhap) -- The leaders of South Korea and Turkey agreed to bolster the two countries' economic partnership and cooperation on the coronavirus during their phone talks Tuesday.

President Moon Jae-in and his Turkish counterpart, Recep Tayyip Erdogan, had the 35-minute conversation ahead of the 70th anniversary of the outbreak of Korean War, on June 25, in which Turkey fought for the South, leading to a "blood brother" relationship.

During the talks, Erdogan stressed the need for close economic cooperation between the two nations in response to COVID-19 and preparations for the post-coronavirus era, according to Cheong Wa Dae spokesman Kang Min-seok.

He expressed hope that South Korea's investment in Turkey and bilateral trade will further expand through the establishment of a payment and settlement system based on their own currencies, Kang said.

In particular, he emphasized the need for cooperation in the defense and shipbuilding industries. 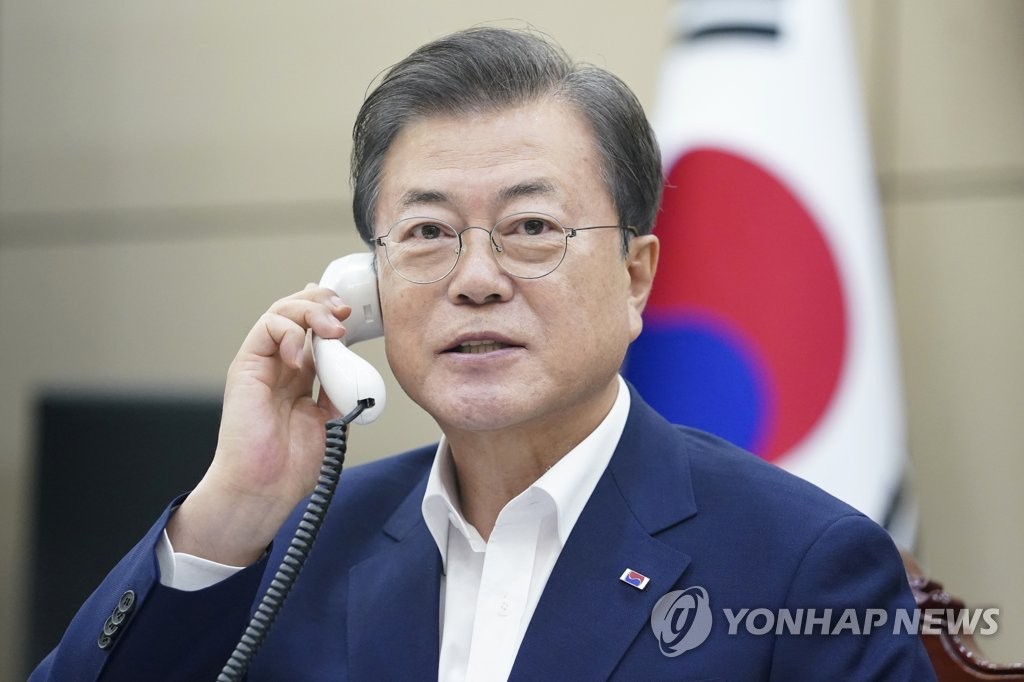 Moon noted that the South Korea-Turkey free trade agreement, signed in 2013, has contributed to promoting trade and investment. He expected a joint economic committee meeting to be held at an early date for discussions on bolstering economic partnerships.

He thanked Erdogan for sending a video message for an official ceremony, to commemorate the 70th anniversary of the outbreak of the three-year conflict on the Korean Peninsula, on Thursday.

Turkey dispatched more than 21,000 troops to help the South, the fourth-most among countries participating in the war under the U.N. flag after the United States, Britain and Canada. South Koreans often call Turkey a "blood brother."

Erdogan's video message has not been revealed yet.

He reaffirmed Turkey's support for the Korea peace process, recalling news that North Korea blew up a joint liaison office in Kaesong.

He said he hopes to visit the construction site in Turkey of what would be the world's longest suspension bridge together with Moon. Two South Korean firms -- SK and Daelim -- are joining a consortium to build the 1915 Çanakkale over the Dardanelles Strait in Turkey.

Once constructed in 2021, it would be a landmark in the history of South Korea-Turkey cooperation, Erdogan was quoted as saying.

Moon replied that he's looking forward to visiting the site and extended his gratitude for continued support for Seoul's peace initiative.

Despite its immigration control against foreign arrivals amid the pandemic, the Turkish government recently allowed entries of South Korean company workers and other business travelers.

The two leaders had their previous phone conversation in early March. Moon had planned to travel to Turkey that month but canceled the trip amid the spread of the coronavirus.