SEOUL/HAWAII, June 24 (Yonhap) -- Remains of South Korean troops killed during the 1950-53 Korean War will return home from Hawaii on the eve of the 70th anniversary of the outbreak of the conflict, the defense ministry said Wednesday.

A total of 147 sets of remains were handed over to South Korea from the U.S. Defense POW/MIA Accounting Agency (DAPP) after being recovered during 1990-1994 joint excavations by the U.S. and North Korea on the North Korean territory or repatriated to the U.S. from the North following the first summit between U.S. President Donald Trump and North Korean leader Kim Jong-un in Singapore in June 2018.

After two rounds of joint forensic reviews since last year, South Korea and the U.S. identified the remains as those of South Koreans, according to the ministry.

The 48-member South Korean delegation, led by Vice Defense Minister Park Jae-min, flew to Hawaii on Sunday on the country's KC-330 Cygnus aerial tanker for the repatriation, the ministry said, adding that the remains and the delegation are scheduled to arrive at Seoul Air Base in Seongnam, south of the capital, later in the day.

Six Air Force fighters will be mobilized to provide air cover when the aircraft entered the Korea's air defense identification zone in honor of the fallen soldiers, according to the ministry.

The handing-over ceremony in Hawaii brought together around 100 officials from both sides, including Adm. Phil Davidson, commander of U.S. Indo-Pacific Command, and the chief of staff of the United Nations Command.

In a symbolic move, a Stars and Stripes flag that draped one coffin was changed to a U.N. flag before being replaced finally with a Korean flag of Taegeukgi.

It is the fourth such repatriation, with the first repatriation taking place in 2012 for the remains of 12 fallen soldiers, the second in 2016 for 15 sets, and in 2018 for 65 sets of remains.

"This repatriation will further consolidate the Korea-U.S. alliance," Park said. "This is a testament of the two countries' commitment to the noble duty of caring those who sacrificed themselves for the nation."

The Seoul government will soon to begin work to identify the remains individually, according to the ministry. 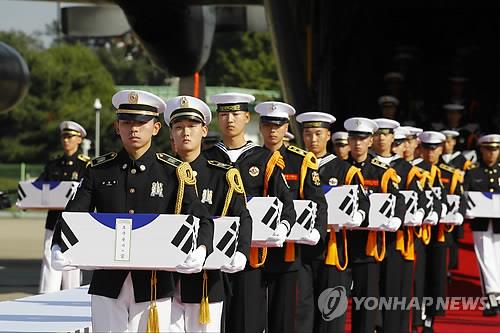