Kim made the decision to hold off on military plans against the South during a preliminary meeting of the Central Military Commission of the ruling Workers' Party on Tuesday, the North's official Korean Central News Agency said, without providing reasons.

The move came as a surprise given that the North had been widely expected to convene a Central Military Commission meeting to endorse a series of military actions that Pyongyang has threatened to take in anger over Seoul's failure to prevent activities from sending anti-Pyongyang leaflets.

North Korea's propaganda outlets, including DPRK Today and Meari, have taken down more than a dozen stories slamming South Korea over the leafleting issue hours after they were uploaded on their websites.

Seoul's unification ministry later confirmed that the websites have withdrawn those stories.

Along with those propaganda websites, North Korea's official media outlets such as the Rodong Sinmun, the organ of the ruling party, and the Minju Joson, the paper of the North's cabinet, also did not carry any reports criticizing South Korea on Wednesday.

This is a rare and marked about-face given that Pyongyang's state media outlets had lambasted the South almost daily over its failure to prevent North Korean defectors from sending leaflets across the border.

North Korea has recently ratcheted up tensions by taking a series of retaliatory steps against what it called an "enemy." It cut off all cross-border communication lines and even blew up an inter-Korean liaison office that was created in its border town of Kaesong as a result of a 2018 summit between the two Koreas.

Pyongyang had said it would redeploy troops to border areas disarmed under inter-Korean agreements for joint business projects and threatened to resume "all kinds of regular military exercises" near the border.

On Saturday, the North's official Korean Central News Agency said Pyongyang is preparing to send 12 million anti-South Korea leaflets via some 3,000 balloons and other means, saying that the time for "retaliatory punishment" is fast approaching. 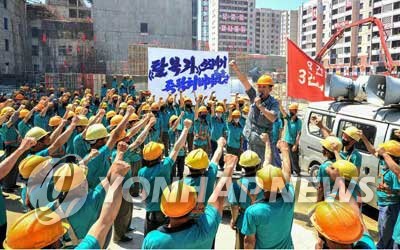