In a joint statement marking the 70th anniversary of the outbreak of the 1950-53 Korean War, Jeong and Esper also said they will continue to back diplomacy for the complete denuclearization of North Korea and reaffirmed their commitment to maintain a firm combined defense posture.

"Both leaders call on North Korea to meet its commitments in alignment with agreements such as the joint statement signed in Singapore after the North Korea-U.S. summit and the Sept. 19 inter-Korean military pact," the statement said.

The war anniversary came after weeks of escalation in tensions on the peninsula, following North Korea's threats to take military action against the South in anger over anti-Pyongyang leaflets sent over the border by defectors and activists.

After blowing up an inter-Korean joint liaison office, reinstalling propaganda loudspeakers and warning of sending millions of anti-Seoul leaflets, North Korea changed tack in an unexpected move Wednesday and said it will suspend military action plans against the South.

"In the spirit of shared sacrifice, Secretary Esper affirms the United States' ironclad commitment to the defense of South Korea, and the two leaders commit to strengthening and adapting the alliance to meet present and future challenges," the statement said.

The two countries will continue joint efforts to promote peace in the region through information sharing, high-level policy consultation and combined exercises, it said.

They also vowed to maintain security in the region through trilateral and multilateral security cooperation, and to strengthen coordination in various issues, including their response to the new coronavirus pandemic.

"The Secretary highlighted South Korea's response to COVID-19 as the model for effectiveness and transparency," according to the statement.

The Korean War broke out on June 25, 1950, with shells and gunshots pounding South Korea's northern regions in predawn hours. The two Koreas are still technically at war, as the conflict ended in a truce, not a peace treaty.

"Seven decades later, the South Korea-U.S. alliance remains the linchpin for security, stability, and prosperity on the Korean Peninsula and in the Northeast Asia region," the statement said. 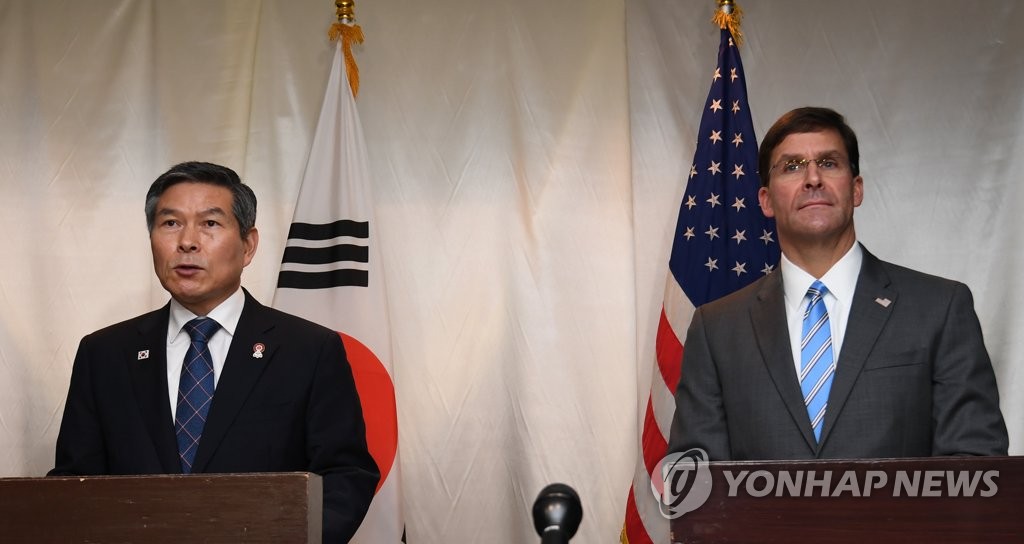