In his controversial memoir, "The Room Where It Happened," Bolton recalled that Trump threatened to pull American troops from South Korea if Seoul did not pay US$5 billion under a defense cost-sharing deal, a staggering increase from their previous Special Measures Agreement (SMA) deal. In the previous SMA, which expired at the end of last year, Seoul agreed to pay about $870 million.

"There was no such discussion at all during the negotiations on defense cost sharing," Defense Minister Jeong Kyeong-doo said when asked during a plenary session of the parliamentary committee on legislation and judiciary to verify Bolton's claim.

Commenting on North Korea's decision on Wednesday to suspend "military action plans" against South Korea, the minister said, "North Korea said it will put off military actions toward the South, but I think they should entirely be withdrawn."

He added it is the government's consistent position that two inter-Korean agreements signed between President Moon Jae-in and North Korean leader Kim Jong-un -- the Panmunjom Declaration and a military agreement -- should be obeyed by the countries without fail. 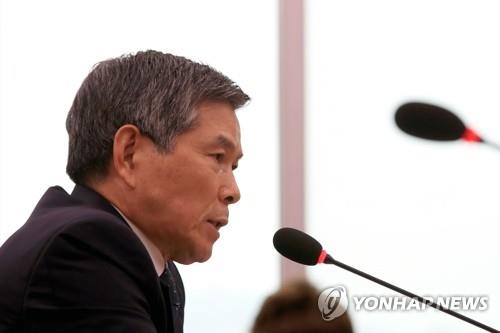