David Helvey, acting assistant secretary of defense for Indo-Pacific security affairs, said the North's recent actions underscored the importance of maintaining a strong readiness posture between Washington and Seoul, with Pyongyang threatening to take military action before suspending such plans on Wednesday.

"Korea remains the hardest of hard targets," he said during a virtual seminar hosted by the Center for Strategic and International Studies. "It's hard to determine tactically what North Korea is going to do on a day to day basis, even though I think we'd all agree that strategically, North Korea, particularly under Kim Jong-un, is very predictable and understandable." 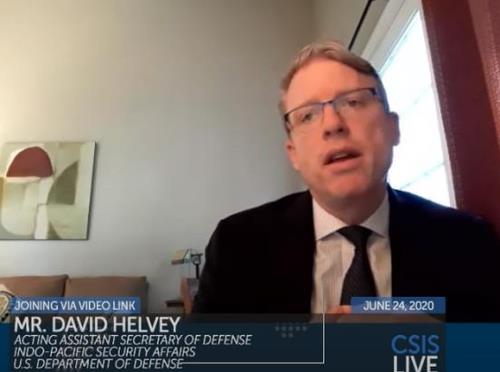 Helvey said the Department of Defense has worked to maintain an effective deterrent in support of the diplomatic efforts aimed at the "final and fully verified denuclearization" of the North.

"Our policy, as I've said, remains very much focused on denuclearization," he said. "It's a denuclearization that we believe can only realistically be obtained through a diplomatic process. I mean, that's certainly our strong, strong preference."

Helvey said that while there has been "some progress," it's unclear whether North Korea is committed to the process that will result in a "much brighter future" for its people.

U.S. President Donald Trump and North Korean leader Kim Jong-un agreed during their first summit in June 2018 to work toward complete denuclearization and permanent peace on the Korean Peninsula.

Despite two more meetings between the leaders, the sides have failed to bridge their gaps over the scope of North Korea's denuclearization and sanctions relief from the U.S.

Helvey reaffirmed Washington's "ironclad" security commitment to its allies, South Korea and Japan, both in terms of will and capabilities.

"And of course," he added, "the capabilities that are resident off the peninsula that provide that fundamental deterrent capability that we don't need to go into detail, but it is there based on our strategic forces."

North Korea's recent provocations, including its demolition of an inter-Korean liaison office, have prompted calls for the redeployment of such assets to the Korean Peninsula.

Helvey said he would like to see South Korea and Japan work more closely together, both with each other and with the U.S. and other "like-minded" partners.

"I'd like to see the Republic of Korea become even more active in global security initiatives," he added, apparently referring to Washington's campaign against Beijing's military and economic rise.

"The ROK is a respected friend and trusted partner to many around the region and the world. It has a tremendous capacity to be able to do good. And so we'd like to be a partner in that. And we'd like to support that," Helvey said.