SEOUL, June 25 (Yonhap) -- The mayor of South Korea's capital on Thursday suggested holding a dialogue with North Korea on disease control and prevention amid the ongoing new coronavirus pandemic that has infected more than 9 million worldwide.

"Seoul has so far shared its disease containment expertise and medical supplies not just with our sister cities but also with other cities around the world. Then, there is no reason why we cannot share them with our brother country, North Korea," Seoul Mayor Park Won-soon said during a luncheon with members of the Peninsula Club.

The club consists of ambassadors of 20 countries who hold posts in both Seoul and Pyongyang. Nineteen ambassadors from the European Union and countries including Finland, Canada and Greece attended Thursday's meeting.

Park said he is "ready to make a visit to North Korea at any time," noting that the city government has recently become the first municipality in the country to attain United Nations sanction exemption on sending anti-virus medical supplies to the North. 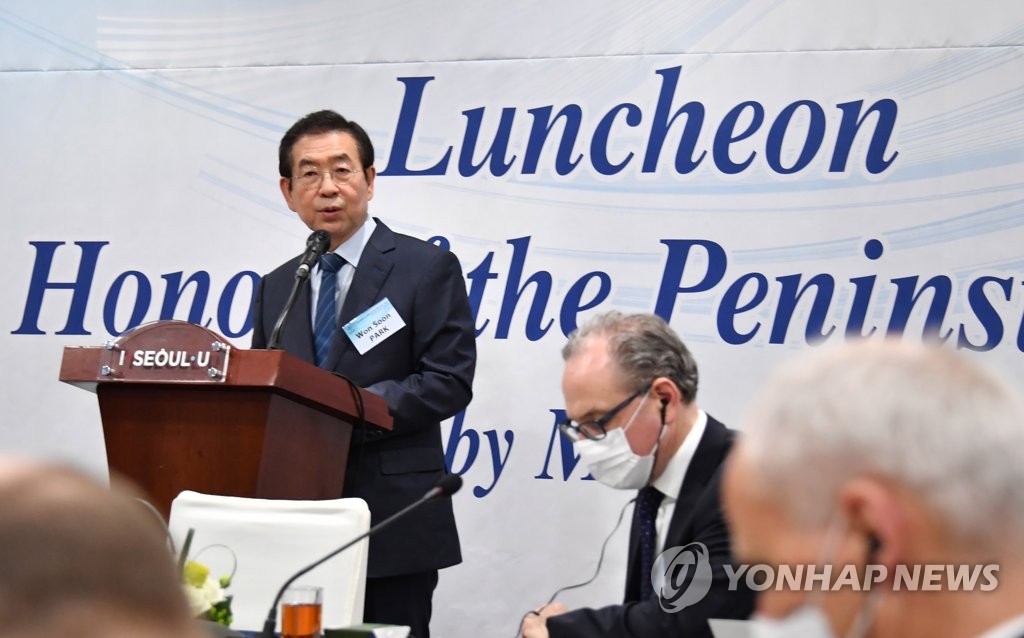 The mayor, meanwhile, urged the North to positively respond to the city's initiative to co-host the 2032 Summer Olympics in Seoul and Pyongyang, a move that he claimed could help bring "permanent peace" to the Korean Peninsula.

"Some may criticize that is a far-fetched idea under the current circumstances. But at a time like this when tensions are rising, we should talk more about the Olympics," he said, referring to how the 2018 PyeongChang Winter Olympics helped bring about dramatic developments in inter-Korean relations.

"I am certain that a 2032 Seoul-Pyongyang joint Olympics will be able to bring permanent peace to the Korean Peninsula. It is meaningless to host the Olympics without Pyongyang, because the very process of bidding, preparing and co-hosting together is a way of building and keeping the peace," the mayor said, asking the ambassadors to help support and deliver the initiatives to Pyongyang.

The mayor's remarks follow heightened tensions between the two Koreas in the past few weeks. Calling Seoul an "enemy," Pyongyang had cut off all cross-border communications lines and blew up an inter-Korean liaison office that opened in its border town as a result of a 2018 summit between the two Koreas.