SEOUL, June 25 (Yonhap) -- President Moon Jae-in received and honored the remains of 147 South Korean soldiers killed in the Korean War, as his government commemorated the 70th anniversary of the outbreak of the conflict Thursday amid a setback in the Korea peace process.

He greeted the flag-draped cases of remains, airlifted from Hawaii the previous day, in a rare nighttime official ceremony held at Seoul Air Base, a military compound located just southeast of Seoul.

Titled, Salute to the Heroes, the anniversary event was meant to show respect for fallen service members and demonstrate Seoul's commitment to friendly cooperation with 22 nations that fought alongside it against invading North Korea under the United Nations flag, according to Cheong Wa Dae.

Moon entered the hangar of the air base, the venue of the ceremony organized by the Ministry of Patriots and Veterans Affairs, together with the bereaved families of six war dead who have been identified. 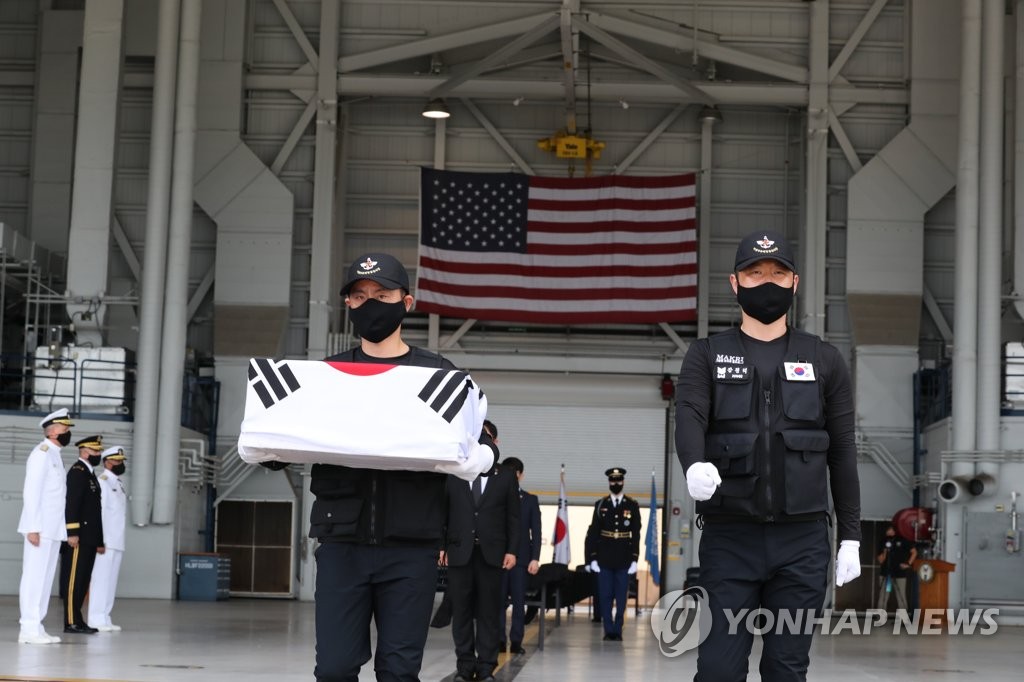 The 147 sets of remains were among those sent to the Hawaii labs of the Defense POW/MIA Accounting Agency, mostly as a result of North Korea-U.S. joint excavation work conducted from 1990-1994. Those were found to be remains of South Koreans killed in action during the three-year conflict.

South Korea dispatched the Air Force's KC-330 Cygnus aircraft for the repatriation of the remains. Seven of them were identified as killed during the Battle of Chosin Reservoir in the early months of the war. One bereaved family was absent from the ceremony for a private reason, with the other 140 sets of remains not identified yet.

"The 147 remains are a valuable result of excavation and repatriation efforts by the U.S. and North Korea over the past 25 years," Cheong Wa Dae said.

Placed next to those throughout the event were the remains of six American service members discovered by South Korean defense ministry's Agency for KIA Recovery & Identification.

Amb. Joanne Doornewaard of the Netherlands, received a Plague of Peace made of smelted parts of canteens, helmets and other military equipment used by the soldiers of the 22 nations as well as barb-wire fences in the Demilitarized Zone (DMZ).

This year's event came days after North Korea blew up a joint liaison office with South Korea in protest against the launches of propaganda leaflets by activists here. It threatened to take military actions, including the deployment of troops in now-closed inter-Korean cooperation project sites in Kaesong and Mount Kumgang. On Wednesday, however, it announced a decision to "suspend" the move at the instruction of the North's leader Kim Jong-un.