Harris made the remark in a pre-recorded video message for a seminar hosted by the Center for Strategic and International Studies, saying he has been following the recent activity at North Korea's border city of Kaesong and the "choice words" from Pyongyang. 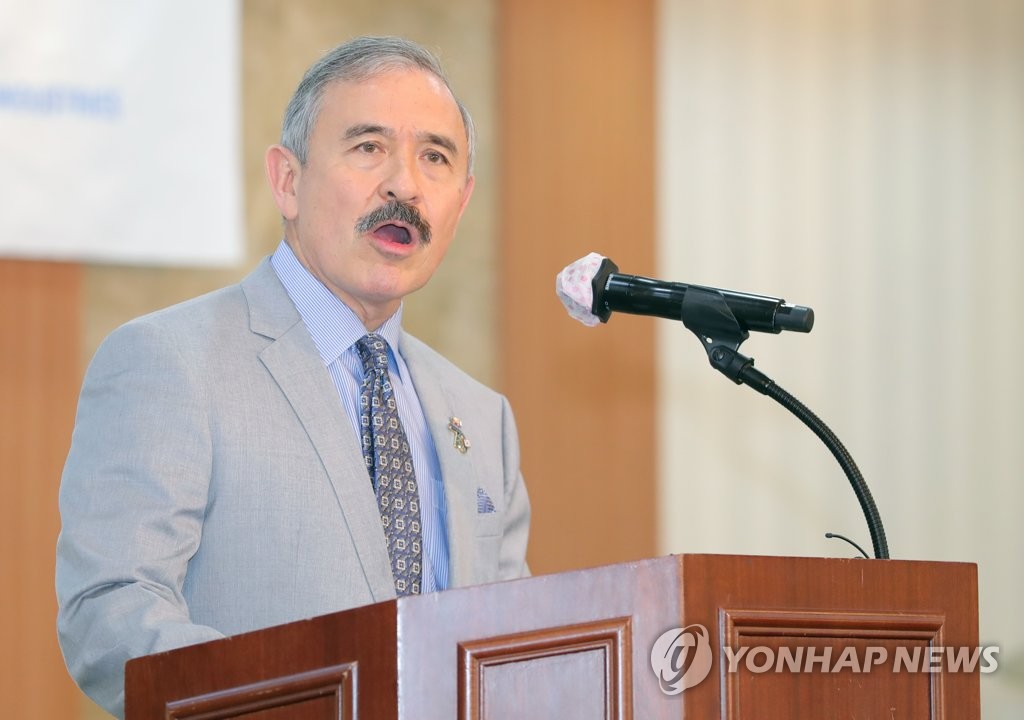 "We remain in close coordination with our ally, the Republic of Korea, on our efforts to engage the DPRK," Harris said, referring to North Korea by its official name, the Democratic People's Republic of Korea.

"The United States fully supports the ROK's efforts on inter-Korean relations, and urges the DPRK to refrain from further counterproductive actions," he said.

In recent weeks, North Korea has blown up an inter-Korean liaison office in Kaesong and increased military threats against Seoul in anger over anti-Pyongyang propaganda leaflets flown into the country by defectors and activists in the South.

The ambassadaor said the U.S. still "remains open to making progress through diplomacy on the goals President Trump and Chairman Kim set at the historic Singapore summit."

U.S. President Donald Trump and North Korean leader Kim Jong-un held their first summit in Singapore in June 2018, producing an agreement that committed the North to "work toward" complete denuclearization of the Korean Peninsula in exchange for U.S. security guarantees.

The two leaders also agreed to work to improve bilateral relations and establish a permanent peace regime on the peninsula, but implementation of the deal has stalled amid wide differences over the scope of North Korea's denuclearization and sanctions relief from the U.S.

"COVID has helped expose the U.S., and frankly, the global economy's overreliance on a single source country supplier, and the administration is working to restructure and remedy unhealthy dependencies," he said, referring to Beijing.

"We are encouraging the ROK to join the Blue Dot Network," he said, calling it an initiative to bring together governments, the private sector and civil society to develop quality infrastructure projects.

Harris also said the U.S. will continue to work closely with South Korea as it develops details of the EPN, an initiative to diversify supply chains away from China.

"I believe if we move quickly and persistently toward a trusted industrial base through a network of friends and allies, including the ROK, the U.S. economy and its strategic supply chain will be in a far better and more secure place than before COVID," he said.

On ongoing negotiations for a defense cost-sharing agreement, Harris said the allies are working at the highest levels toward a "fair and equitable" deal.