SEOUL, June 26 (Yonhap) -- HDC Hyundai Development Co.'s planned acquisition of Asiana Airlines Inc. has been delayed to the second half due to the new coronavirus' impact on the airline industry, industry sources said Friday.

In December, the HDC-Mirae Asset Daewoo consortium signed a deal to acquire the country's second-biggest airline from Kumho Asiana Group, with a plan to complete the acquisition by June 27.

Early this month, Asiana's main creditor Korea Development Bank (KDB) demanded that the HDC-led consortium notify the state lender of its intent to complete the deal by the initially scheduled date. 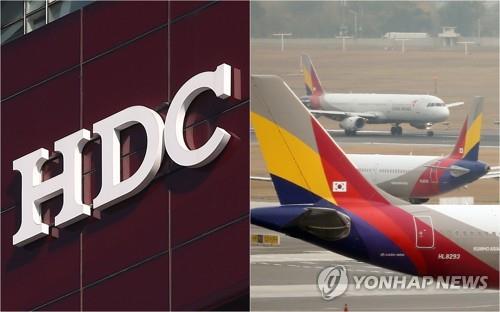 In response, HDC called for renegotiations with Asiana creditors over the acquisition terms, describing the ongoing virus crisis as a "never expected and very negative factor" that will affect its planned acquisition of Asiana Airlines.

HDC also cited snowballing debts of the airline as another reason for renegotiations, noting that debts are "damaging the acquisition value of the carrier."

HDC has demanded renegotiations with the KDB through written documents, but the policy lender asked the company to hold face-to-face talks.

"We once again sent a letter to HDC last week to ask the company to have a meeting in person to discuss the renegotiations," a KDB spokesman said over the phone.

Lee reportedly persuaded Chung to make a decision to acquire Asiana and said the KDB will provide a wide range of financial support to help HDC ride out the impact of the COVID-19 pandemic.

HDC has reiterated its plan to acquire Asiana, dismissing speculation that it may have difficulties in taking over the company due to the economic fallout from the coronavirus outbreak.

HDC and Kumho Asiana Group will have six more months to close the deal by Dec. 27 as HDC has to receive approval from all countries to which it flies, the KDB spokesman said.

The HDC consortium signed the deal to acquire a 30.77 percent stake in Asiana from Kumho Industrial Co., a construction unit of Kumho Asiana Group, as well as new Asiana shares to be issued and Asiana's six affiliates, for 2.5 trillion won (US$2.2 billion).

As a result, its net losses for the January-March quarter deepened to 683.26 billion won from 89.18 billion won a year earlier.

To help Asiana stay afloat, the country's two state banks -- the KDB and the Export-Import Bank of Korea -- plan to inject a combined 1.7 trillion won into Asiana. Last year, the two banks extended a total of 1.6 trillion won to the cash-strapped carrier.