SEOUL, June 27 (Yonhap) -- The remains of six service members who died during the 1950-53 Korean War while fighting under the U.N. flag were sent to Hawaii, the United Nations Command (UNC) said Saturday.

The remains, believed to be of Americans, were excavated at multiple locations in South Korea across various periods of time and had been kept by Seoul's defense ministry, according to the U.S.-led UNC and the ministry.

On Thursday, which marked the 70th anniversary of the onset of the conflict, the remains of the six service members were transferred to the U.S. Forces Korea during a joint ceremony that included the repatriation of 147 South Korean service members.

Then on Friday, the remains were loaded onto an aircraft bound for Joint Base Pearl Harbor-Hickam, Hawaii, and left Osan Air Base in Pyeongtaek. The U.S. Defense POW/MIA Accounting Agency there will be tasked with identifying the remains, they added.

"Although separated from their countrymen, they were never forgotten," UNC Command Chaplain Col. David Bowlus prayed over the repatriated remains before their departure.

UNC said it maintains its solemn obligation to recover those who have fallen in battle and those listed as missing in action or prisoners of war.

Around 1.95 million people from 22 countries, including the United States, Britain, Canada and Turkey, also took part in the three-year war, including six countries that extended medical support. Of them, 33,686 U.S. service members were killed, 92,134 wounded and 3,737 unaccounted for, according to government data. 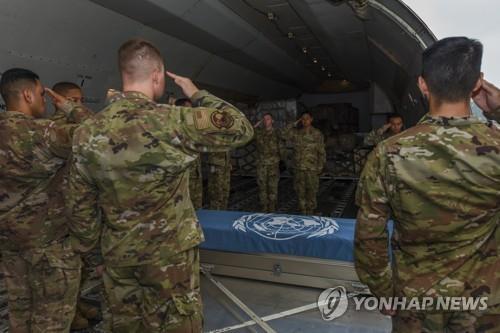