In late May, Trump floated the idea of adding South Korea, along with Australia, India and Russia, to the lineup of the G7, as the current membership is "outdated" and fails to properly represent global circumstances.

The existing members are the U.S., Britain, Canada, France, Germany, Italy and Japan.

Citing diplomatic sources, Kyodo reported that Japan conveyed the objection immediately after Trump raised the prospect, saying that South Korea is not "in lockstep with G7 members on China and North Korea issues."

The U.S. government then told the Japanese senior official who conveyed the message that Trump would make a final decision on the matter, according to Kyodo. 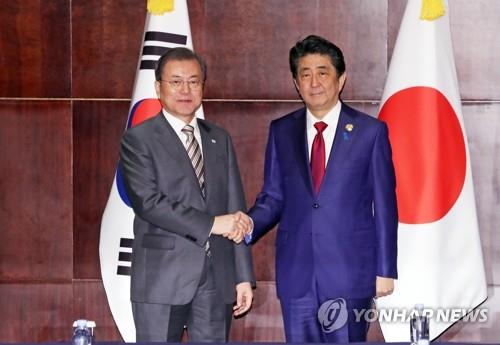 The agency also reported that Japanese Foreign Minister Toshimitsu Motegi said on a TV program that it is "important to keep the G7 framework itself, and I believe this is an overall consensus."

Asked about its stance on Japan's reported response, an official of Seoul's foreign ministry simply said, "Any changes to the G7 structure are subject to discussions among current members. We know that Washington is internally reviewing the case."

"Abe has conducted anti-South Korean politics to boost his approval rating, though global coordination is necessary against the global COVID-19 pandemic," Song said in a Facebook post, calling on Tokyo "to be a responsible member of the international community."

Relations between Seoul and Tokyo have remained at the lowest ebb in years over historical and economic rows.

During telephone talks with Trump, President Moon Jae-in expressed his willingness to attend an in-person group summit if organized. The U.S. is the host of this year's G7 session on a rotational basis.