SEOUL, June 29 (Yonhap) -- Eastar Jet Co. said Monday its founding family members will donate their stake in Eastar in a move to bring Jeju Air Co.'s planned takeover of the smaller budget carrier back on track amid concerns over potential rupture.

Rep. Lee Sang-jik of the ruling Democratic Party, Eastar Jet's founder, and his family will donate their entire 39.6 percent stake in the budget carrier. The value of their stake in Eastar reaches 41 billion won (US$34 million) but other details about the donation plan were not immediately available.

"We call on Jeju Air to clarify whether it has a real intention to acquire Eastar Jet within a day and we also ask the government to extend a financial helping hand to the country's virus-hit low-cost carriers," Eastar Chief Executive Choi Jong-gu said. 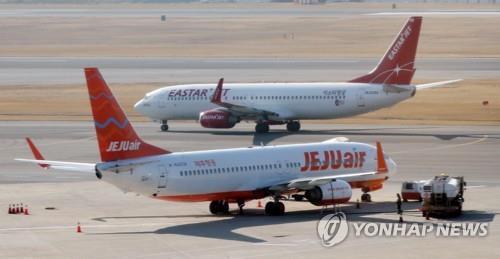 In March, Jeju Air signed a deal to acquire a controlling 51.17 percent stake in Eastar Jet from its parent, Eastar Holdings Inc., for 54.5 billion won (US$45 million) as part of its expansion strategy despite COVID-19's growing impact on the airline industry.

Eastar Jet suspended all of its flights in late March, and its 1,700 employees went on paid leave as Jeju Air said it will guarantee wages for them after the signing in March, but Jeju Air changed its position in May with the worsening COVID-19 pandemic, Eastar Jet said.

But Jeju Air balked at Eastar's argument, claiming that the Eastar's management made the decision to halt all flights and sent its employees home without paying wages.

Eastar began to delay making payments to its partner companies at airports and oil suppliers in December. The subcontractors and refiners said that they won't work with Eastar any longer in late March, Jeju Air said.

The tit-for-tat between the two low-cost carriers has brought Jeju Air's acquisition of Eastar Jet to a halt.

Asked about a possible collapse of the deal, Jeju Air reiterated that it will proceed with the deal.