SEOUL, June 29 (Yonhap) -- Ending a month-long standstill of the National Assembly, the ruling Democratic Party (DP) took all but one of parliament's 18 standing committee chairman seats Monday in unilateral voting boycotted by the main opposition and minor parties.

A parliamentary plenary session, led by the DP, elected 11 representatives from the ruling party to chair the Special Committee on Budget and Accounts, the National Policy Committee as well as nine other parliamentary standing committees.

The chairman seat of the Intelligence Committee was only left empty due to the need for approval by deputy speakers from both the ruling and main opposition party. The seat is also on course to go to the DP after the main opposition United Future Party (UFP) refused to take any chairman posts.

It will put all the leadership seats of the 18 parliamentary standing committees in the hands of the DP after six DP lawmakers were initially elected to head six key committees, including the Legislation and Judiciary Committee, in mid-June.

It is the first time since 1988 that the ruling party monopolizes all the standing committee chairman seats. Since that year, the biggest rival parties have distributed the committee leadership seats between them, breaking from the previous winner-take-all practice.

As they did with the previous voting earlier this month, the UFP boycotted the election voting of the plenary session, accusing the ruling party of sidestepping the main opposition party.

Taking issue with the DP taking the chairmanship of the Legislation and Judiciary Committee, which has customarily been reserved for the main opposition party, the UFP has vehemently resisted the ruling party's efforts to expedite the formation of the standing committees.

On Monday morning, the two rival parties' floor leaders sat down for last-minute negotiations at the mediation of National Assembly Speaker, Rep. Park Byeong-seug, only to see the meeting fall through without an agreement.

UFP floor leader Rep. Joo Ho-young suggested that the chairman post of the Legislation and Judiciary Committee be reserved for his party for the second half of the current four-year parliamentary term which kicked off a month earlier. 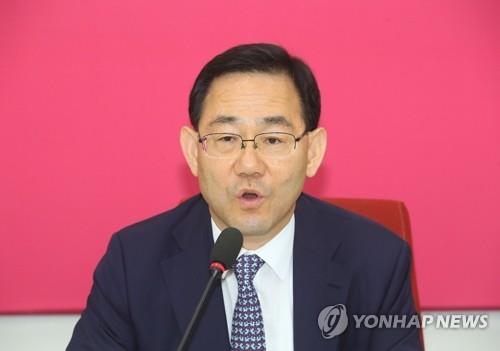 While being disposed to distribute seven of the 18 committee chairman seats to the UFP as is the custom, however, the DP rejected the UFP's proposal, saying that the legislation committee chair for the second half should go to the next ruling party.

Without any concessions from the ruling party, Joo said in protest that "the UFP decided not to take (any) committee chairman seats ... because (doing otherwise) would only make us a sidekick at the National Assembly that is unilaterally run by the DP."

Joo accused the DP of shattering the time-honored custom of leaving the legislation committee chairman seat to the main opposition while vowing to perform a role as a thorough watchdog against the ruling party.

Amid continued bipartisan wrangling on the issue, the National Assembly has been at a standstill since its new term began on May 30.

Completing the committee formation, the chamber is to immediately kick off the process to pass a new COVID-19 response special budget bill, which has been pending at the assembly nearly for a month.

"Today marks the first full month since the 21st National Assembly began, but its opening ceremony, as well as the formation of standing committees, have yet to be done. And for that, I feel very sorry," Assembly Speaker Park said at the start of the Monday plenary session.

"The country is in a state of emergency due to the new coronavirus, its economic fallout and inter-Korean tensions," Park said, adding that the National Assembly can no longer be left inactive.

Ending the month-long standstill, the DP and the government are determined to pass the budget bill, the third round of South Korea's virus response extra spending, within this week. 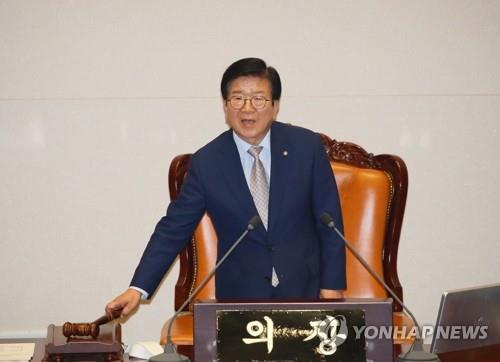 "Economic uncertainties are continuing as (we remain unaware of) the start and end of the COVID-19-driven crisis," Chung said. "Only timely injection of sufficient funds can create the virtuous circle ... through which the economy should make a V-shaped rebound," Chung said.

The Monday parliamentary decision put DP floor leader Rep. Kim Tae-nyeon at the chairmanship of the House Steering Committee, Rep. Youn Kwan-suk the National Policy Committee and Rep. Jung Sung-ho the Special Committee on Budget and Accounts, among others. 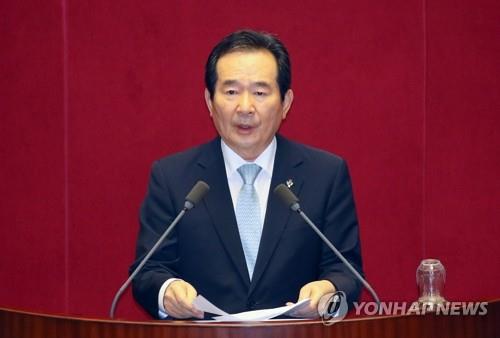