SEOUL, June 30 (Yonhap) -- Yonhap News Agency hosted an annual forum in Seoul on Tuesday to explore ways to reinvigorate efforts to promote inter-Korean reconciliation and lasting peace on the Korean Peninsula in the post-coronavirus era.

The forum took place at Lotte Hotel under the main theme of "The Post-Corona era, New Opportunity for the Korean Peninsula?" It was to feature senior government officials, lawmakers and renowned scholars, including Vice Health Minister Kim Ganglip, and Moon Chung-in, a special security adviser to President Moon Jae-in.

"This year marks the 70th anniversary of the outbreak of the Korean War. We still bear the scars of the war and the situation on the Korean Peninsula is not so smooth," Cho Sung-boo, president and CEO of Yonhap, said in opening remarks.

"I look forward to hearing the views of lawmakers and experts on the inter-Korean relations and finding solutions for a path toward reconciliation, cooperation and peace on the Korean Peninsula in the post-pandemic era," he said. 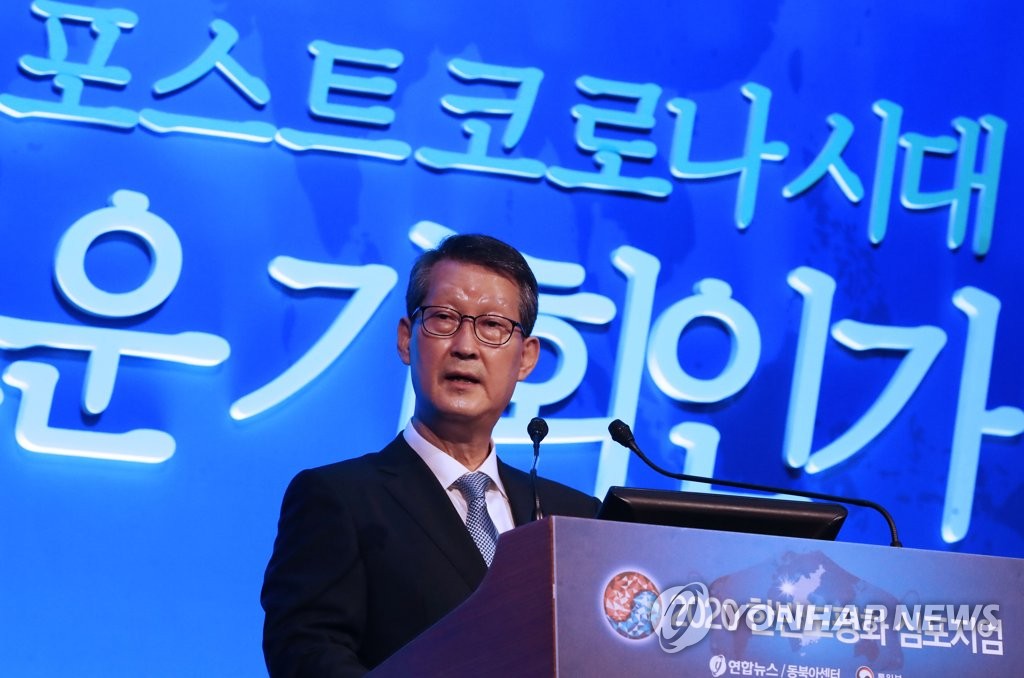 Prime Minister Chung Sye-kyun, who was present at the opening, emphasized that building permanent peace is a road that both Koreas must take and urged North Korea to return to dialogue to work together to achieve that goal.

"The direction is clear and cannot be stopped. We must not reverse the past three years of the dire efforts we have made. Even if it may be slow, we should take one step each toward the road to peace," he said in a congratulatory speech.

"The government will do its best to manage the situation on the Korean Peninsula in a stable manner. I hope that North Korea will return to the dialogue table as soon as possible to resolve the difficult problems faced by the two Koreas through communication and cooperation."

Vice Health Minister Kim was expected to deliver a special lecture on Seoul's response to the COVID-19 pandemic, while presidential adviser Moon was also to make a keynote speech on his assessment of the recent tensions on the peninsula.

The forum is divided by two comprehensive sessions.

In the first session, participants will discuss the "new Cold War" marked by a growing great power rivalry and its impact on the security situation of the divided peninsula. It will be moderated by the presidential adviser, Moon.

At the session, Kim Joon-hyung, head of the Korea National Diplomatic Academy, will deliver a presentation on the contours of international politics in the post-COVID-19 era and peace efforts on the peninsula.

Five-term Rep. Song Yong-gil of the ruling Democratic Party and four-term Rep. Park Jin of the main opposition United Future Party will join the session to discuss the prospects of inter-Korean ties and the role of the 21st National Assembly launched last month.

The second session will address questions over whether the two Koreas can move beyond the current rough patch and return to a reconciliatory track. Former Unification Minister Lee Jong-seok will moderate it.

Koh Yu-hwan, the president of the Korea Institute for National Unification, will deliver a presentation on how inter-Korean relations will move forward after the North's demolition earlier this month of an inter-Korean liaison office in its border city of Kaesong.

The session will also be attended by Lee Jeong-chul, professor of diplomacy at Soongsil University, and Na Hee-seung, president of the Korea Railroad Research Institute.