SEOUL, June 29 (Yonhap) -- A blackmail case involving a reporter will be referred to the country's top prosecution's external committee for a review over the probe's validity, the prosecution said Monday.

They said a panel of civilians, formed by the prosecution, concluded Monday that the case was worth a review by outside experts to check the investigation's neutrality and fairness. The review system was introduced in 2018 for cases that are of great public interest.

The case centers on the reporter from the cable channel Channel A, who is suspected of pressuring a jailed financier to divulge corrupt acts by a pro-government commentator. He allegedly tried to leverage his ties with a senior prosecutor deemed powerful enough to influence the inmate's case.

The prosecution in April launched the probe into the incident, which was first reported by the broadcaster MBC on March 31.

According to the MBC report, the Channel A journalist coaxed and blackmailed the businessman, named Lee Cheol, to tip him off about Rhyu Si-min, a popular writer and chief of a public foundation in memory of former President Roh Moo-hyun.

Lee, formerly the largest shareholder of ShillaJen, a struggling biotech company, was sentenced to 12 years for fraud last year and received an additional 2 1/2 years in February.

The reporter was digging up rumors that Lee paid inappropriately large lecture fees to the liberal pundit a few years ago. Rhyu denied that claim.

MBC revealed the reporter's letters to Lee and a recorded conversation between the journalist and an associate of Lee, in which he warned Lee to cooperate or face a longer prison sentence, further financial losses and new charges against his family.

Lee's associate told MBC that the reporter offered to use his close ties with the prosecution to help Lee and his family avoid more punishment.

The reporter played to him a recorded conversation with a senior prosecutor, Han Dong-hoon, believed to be close to Prosecutor-General Yoon Seok-youl, to show his connection with the prosecution. Han denied he had such a conversation.

The Moon Jae-in administration has pushed to transfer some investigative powers from the prosecution to police and establish a separate body to probe corruption and power abuse by high-level officials.

After the MBC report, a media NGO filed a complaint accusing the reporter and the prosecutor of blackmail.

On June 14, the reporter filed a petition with the prosecution to call for an outside panel to review the ongoing probe into him, a separate review system from the 2018 one.

To respond to the request, the jailed Lee requested for a public assessment of the investigation. The prosecution should form an independent committee made up of outside experts within two weeks.

Last week, such a committee recommended the prosecution not to indict Samsung Electronics Vice Chairman Lee Jae-yong in a high-profile succession case. A finding by the committee is not legally binding, but it has played an important role in determining the course of the prosecution's investigation. 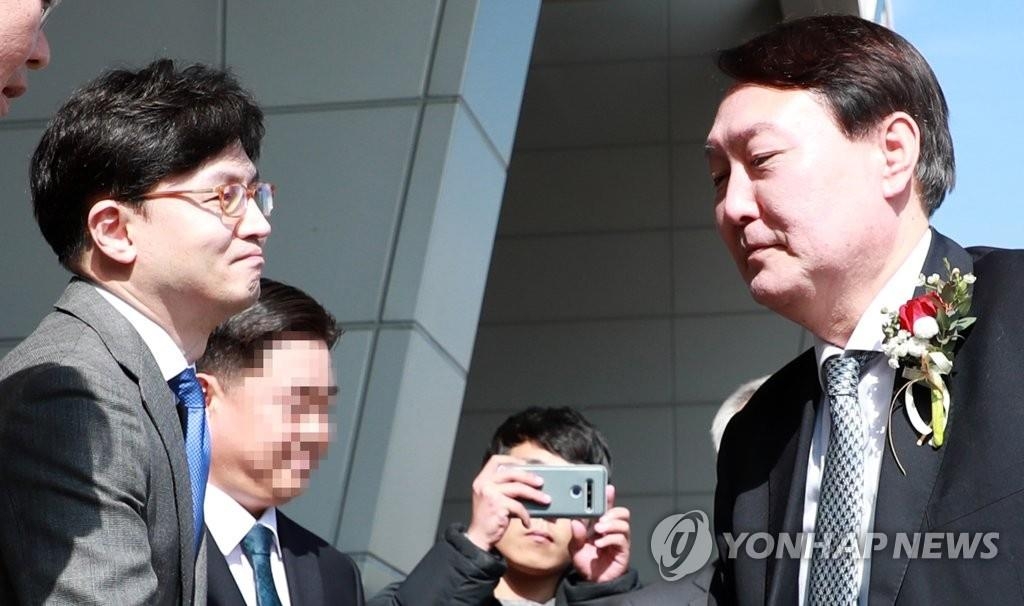 Probe on reporter's blackmailing to get public assessment

Probe on reporter's blackmailing to get public assessment