The Air Force's KC-330 left Incheon International Airport, west of Seoul, earlier in the day carrying the 17th batch of the 170-strong Akh Unit, according to the ministry.

It is the first time for the aerial tanker to carry out the troop transport mission since being put into service last year.

On its way back, the aircraft will bring home the 16th batch of the unit Friday.

The newly dispatched members underwent a virus test and all tested negative, the ministry said.

"Despite the COVID-19 situation, the rotation could take place in a timely manner through close bilateral coordination, which was possible thanks to the special relationship between the two countries and the confidence in South Korea's quarantine measures," the defense ministry said in a release.

The unit is tasked with training the Middle East country's special forces since 2011. "Akh" means "brother" in Arabic.

"The deployment of the aerial tanker not only helps save costs, it ensures the safety of troops," it added.

The tanker can fly distances up to 15,320 kilometers, with a maximum flight altitude of 12,600 meters. 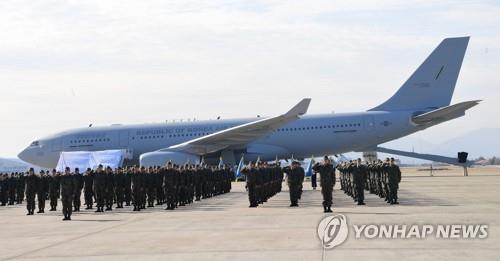