Ambassador Alexander Matsegora also said in an interview with Russia's TASS news agency Monday that there is no reason to believe that the North Korean leader's younger sister, Kim Yo-jong, is being trained as the next leader of the communist nation.

"It was all made in such a low-grade way, with Photoshop," the envoy said.

Slamming Seoul for failing to stop North Korean defectors from sending such leaflets, the North cut off cross-border communication lines and even blew up a joint liaison office building, a key symbol of reconciliation.

The North had threatened a series of military action, but leader Kim put the plans on hold.

Rumors about leader Kim's health and even the possibility of his death swirled through April due to his prolonged absence from public view, but they came to an end when he attended an event to mark the completion of a fertilizer factory in early May.

Such speculation, however, has reemerged again as Kim has not been seen in public for more than 20 days.

"I am sure these are empty rumors with no ground under them," Matsegora said. "The country is functioning as usual. The leader appears in public less frequently, for sure, but he still makes decisions, his orders are being published." 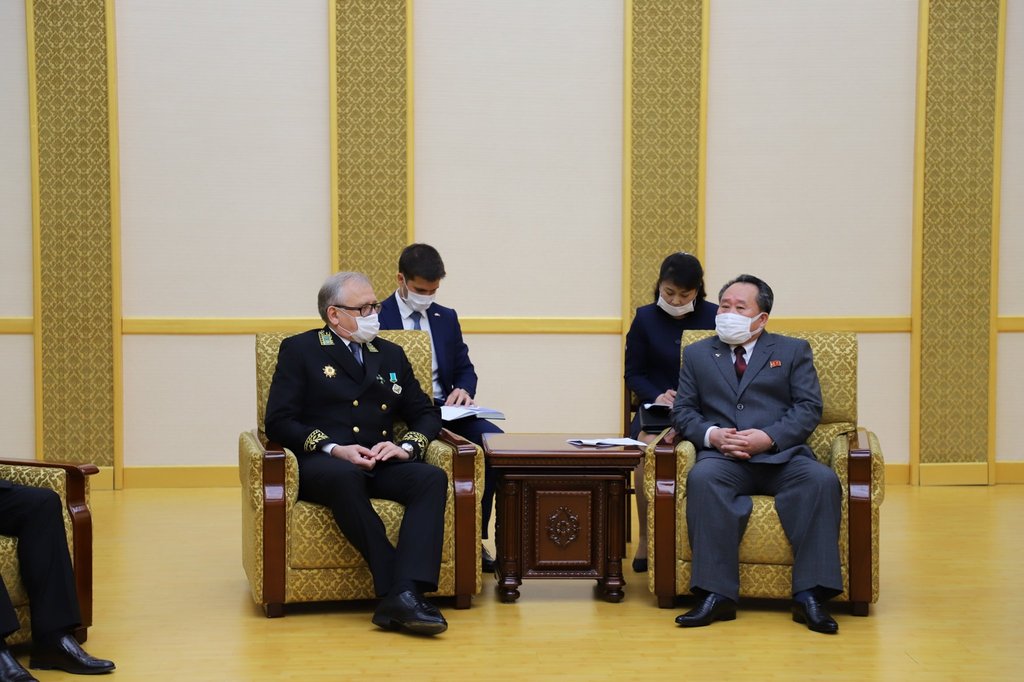 The ambassador said that Kim's absence from the public eye might have to do with him focusing on "rethinking" "the unsuccessful outcome of the Korean detente," referring to worsening cross-border ties and tensions after the two Korea's three summits in 2018.

He also said there is "no reason to believe" that Kim Yo-jong, the younger sister of leader Kim, might be trained to take the helm of the communist state, dismissing rumors that she might be prepared to succeed her brother should he die or become incapacitated.

"There is absolutely no reason to say that she is being trained for such a situation," he said. "She is a rather young person though she has serious political and foreign policy experience. She can be viewed as a well-established high-ranking statesperson. This is where I would put a full stop.

"No one dares to call themselves No. 2 in the country," he added. "I think that if you asked comrade Kim Yo-jong whether she was No. 2, she would answer with a strong 'no,'" he added.

With regard to heightened cross-border tensions after North Korea bristled at anti-Pyongyang leaflets sent by activists in South Korea, the ambassador said that recent escalation appears to be based on the North's frustration over South Korea's failure to implement 2018 summit agreements.

"The thing is, the North Korean leader very much counted on relations between the North and the South to be decided in a bilateral format, with no outer intervention," he said.

"The South Korean side explained it all by the North having to negotiate nuclear business with the U.S. first. This, of course, caused a negative reaction," he added. "In general, it was clear that (the escalation) would happen. And, regrettably, it happened."

He said that the sending of leaflets from the South might not be the main reason for the recent escalation of tensions but served as the "last straw."

"This was not the first launch of leaflets; they were launched 10 times last year. On May 31, another batch of leaflets was launched, sparking discontent and serious outrage," the ambassador said, adding that the latest batch of leaflets insulted leader Kim's wife, Ri Sol-ju.

"This, of course, is unacceptable, and it caused a serious discontent. Not only among the authorities, but among the people as well," he said.

North Korea has recently ratcheted up tensions in anger over the leaflets flown by North Korean defectors in the South. It cut off all cross-border communication lines and even blew up an inter-Korean liaison office that was created in its border town of Kaesong as a result of a 2018 summit between the two Koreas.

Pyongyang had said it would redeploy troops to border areas disarmed under inter-Korean agreements for joint business projects and threatened to resume "all kinds of regular military exercises" near the border. Last week, however, leader Kim suspended "military action plans" against South Korea without providing reasons for the move.

The government has advised against sending such leaflets, citing concerns about the safety of residents in the border regions, but they have often ignored the appeal, citing their right to freedom of expression.