According to the Korea Meteorological Administration (KMA) and the Central Disaster and Safety Countermeasures Headquarters (CDSC), 206 millimeters of rain fell in Gangneung, an eastern coastal city about 240 kilometers east of Seoul, as of 3 p.m. Tuesday, marking the city's largest daily precipitation figure for June since record keeping began in 1911. The previous record was set on June 28, 1953, when 160.4 mm of rain fell in Gangneung. 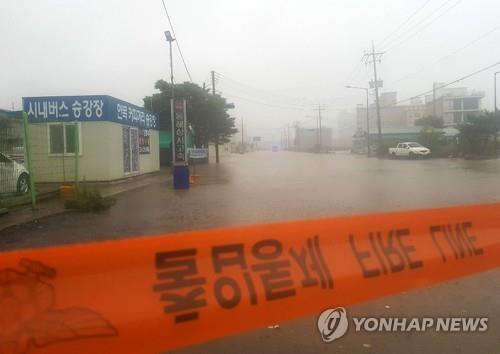 Its neighboring Gangwon Province city of Sokcho received 175.9 mm of rain, the biggest daily precipitation figure for June since the city began relevant observation in 1968, they said, noting the Gangwon coastal region was intensively hit by heavy downpours for about 12 hours as strong easterly winds caused by low pressure smashed into the so-called Baekdudaegan mountain range along the coast.

They said over 250 mm of rain also fell in the Mount Seorak areas located near Sokcho.

The provincial authorities of Gangwon said they received 31 reports of house and road flooding, soil runoff and fallen trees across the province until shortly after noon, while the municipality of Gangneung reported 47 cases of property damage. Gangneung officials said they are also looking into a report of a man in his 20s believed to have gone missing amid heavy downpours.

The precipitation in Jeju, Busan, Ulsan and Seoul reached 224.5 mm, 140 mm, 118.5 mm and 73 mm, respectively, as of 5 a.m., the agency said, noting the southern resort island of Jeju was also hit particularly hard by gusts blowing at maximum instantaneous speeds of over 30 mps.

The maximum instantaneous wind speed over Jeju International Airport reached 31.1 mps late Monday night, forcing the cancellations of 10 flights, while 23 cases of property damage, including destroyed house roofs and windows and fallen street trees, were reported overnight from the island.

The CDSC said a total of 22 houses and a dozen vehicles were flooded by downpours overnight across the country, with a total of 16 domestic flights canceled. But no casualties have been reported, it noted.

Numerous collapses of house walls, utility poles and street trees were also reported in Busan and the neighboring southeastern coastal areas battered by heavy rain of over 100 mm and strong winds with maximum instantaneous speeds of up to 17 mps, the agency noted. 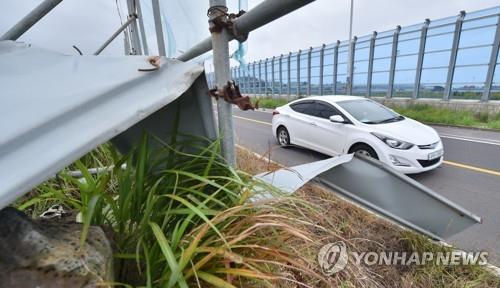 The KMA lifted its heavy rain advisory for almost all parts of the country Tuesday morning, but maintained its heavy rain warning for Gangwon Province's coastal areas that include Gangneung, forecasting heavy downpours and strong winds in the region until late evening.

The agency also lifted a strong wind advisory for eastern coastal and other regions as of 6 p.m.