SEOUL, June 30 (Yonhap) -- North Korea should offer an explanation about its demolition of an inter-Korean liaison office building, a special adviser to President Moon Jae-in said Tuesday, urging the communist state to change course and return to talks.

Moon Chung-in, special adviser for diplomatic and security affairs, made the remark during a peace forum hosted by Yonhap News Agency, stressing that the liaison office was built as a symbol of inter-Korean reconciliation and peace.

"The Kaesong liaison office doesn't mean just its financial value of 17 billion won (US$1.42 million). The liaison office was built with taxpayer money of South Koreans as a symbol of inter-Korean reconciliation and peace," Moon said during a keynote speech at the forum.

"It is hard for our people to accept that the North unilaterally blew it up like a show," he said in a keynote speech during the peace forum hosted by Yonhap News Agency. "I believe there must be an explanation from the North about this."

The building's demolition was one of a series of measures that the North has taken or threatened to take in anger over anti-Pyongyang propaganda leaflets that defectors in the South sent across the border to criticize the North's leadership.

Pyongyang has cut off communication lines with the South and threatened to take a set of military measures, such as redeploying troops to border regions. But the execution of the military measures was put on hold under an order from leader Kim Jong-un last week.

"There are so many things that should be done between the South and the North," Moon said. "What can be achieved if it cut off communication lines and set relations with us as those with an enemy? They should restore communication lines at an early date, explain about the liaison office and come up with a forward-looking breakthrough."

Moon voiced concerns that any military clash between the two Koreas under the current state of tensions is quite possible and called for "patience" to keep the situation under control to prevent a clash from happening.

"Accidental military clashes can happen, and we need to keep the situation in a stable manner to avert any clash. And we need patience to do that. We should patiently look for ways to turn things around," he said.

In order to make progress, Moon called for strengthening diplomacy with the United States, as Seoul's close ties with Washington are essential in reviving the dialogue momentum between the U.S. and the North.

He also suggested that the government bolster diplomacy with China and Russia -- the North's traditional allies -- as well, so that it can use those indirect channels to deliver the president's message to the North.

Touching on the COVID-19 outbreak, the adviser called for more systematic efforts to share Seoul's know-how in tackling the virus with the international community, so that it can lead to exchanges with the North in the health sector to help the regime cope with the virus.

"The government and medical sector have presented a very good model for quarantine, testing and treatment. I wouldn't want anything more if we can use this to help the North overcome the pandemic." 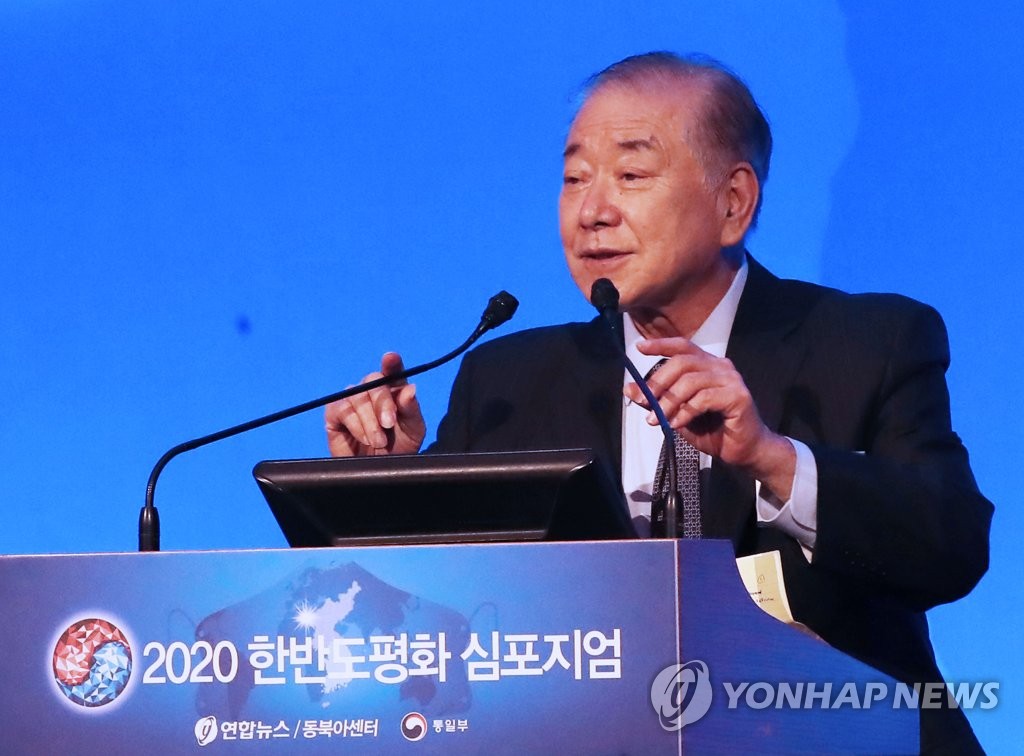