The special programming on Korea will feature some 60 package travel deals on South Korea, including luxury hotels and popular tourist destinations like amusement parks and ski resorts.

James Liang, former CEO and co-founder of Ctrip, will personally appear on the show to promote the products. Purchases will be available on WeChat messengers and Ctrip's own platform.

KTO highlighted that purchased services will only be made available to customers pending the COVID-19 situation being resolved.

"The live commerce program goes to show the level of anticipation the Chinese tourism industry has towards South Korea in becoming a popular travel destination when the virus situation subsides," the KTO assessed.

KTO, however, noted the event is not a signal that China is about to lift the restriction on sales of South Korean cultural and group travel goods any time soon.

"China's restriction is aimed at group tours to South Korea, while Wednesday's event is focused on selling travel services to individuals," a KTO representative said.

"Super Boss Live Show," which first began on March 23, has aired 15 episodes so far. The amount of transactions per single episode averages 6.8 billion won (US$5.65 million). 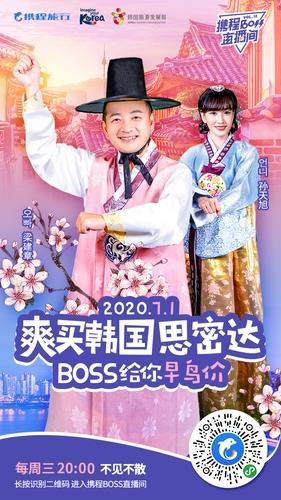