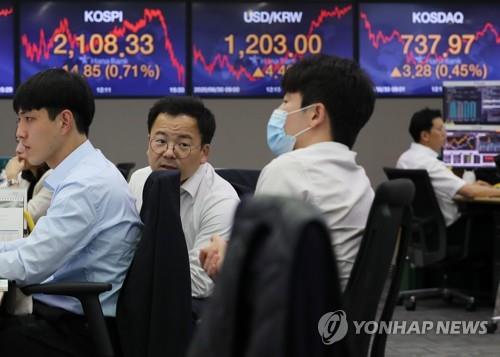 The index's rise was mostly attributed to hopes of a recovery, along with a counter-sentiment that followed a sharp fall in the previous session, according to an analyst.

"The Korean stocks are on a rebound in resistance to the large fall from the previous session, but the hike will be limited due to the growing (global economic) uncertainties," Kiwoom Securities analyst Seo Sang-young said.

The index got off to a strong start, thanks to a record gain in pending home sales in the U.S.

Most bond prices, which move inversely to yields, closed lower. The yield on three-year Treasurys stayed flat at 0.842 percent, while the return on the benchmark five-year government bond increased 1.6 basis points to 1.111 percent.