The slower pace of the decline in exports came as major economies around the globe slowly resumed their business activities, along with a calendar effect, as there were more working days in the month. 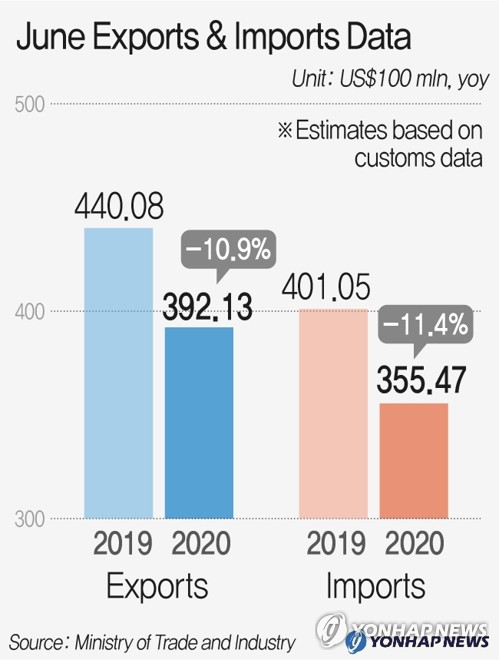 Outbound shipments of chips, the mainstay good, remained nearly unchanged from the previous year at $8.3 billion, accounting for roughly 21 percent of the total exports, as overseas firms reduced facility investment, coupled with the slow global demand for smartphones.

Due to the virus pandemic, exports of other major products continued to lose ground, although some products showed an improvement from the previous month.

Exports of automobiles dropped 33.2 percent in June from the previous year, due to the weak demand from the U.S. and European markets, while local production lines were also disturbed by the pandemic. The figure nevertheless slowed from a 54 percent on-year drop posted in May.

Overseas sales of auto parts moved down 45 percent as major carmakers around the globe scaled down their production amid rising inventories.

Sales of a handful of segments, on the other hand, gathered ground.

With a rising number of people working from home, exports of computers soared 91.5 percent over the cited period. Shipments of biohealth products and foodstuffs also jumped a whopping 53 percent and 11.7 percent, respectively, amid the global pandemic.

By destinations, exports to China, the top trading partner of South Korea, rebounded for the first time in six months by 9.5 percent in June from a year earlier as the world's No. 2 economy resumed its business activities.

Exports to the United States dropped 8.3 percent in June on-year, although it improved from a 29 percent drop posted a month earlier. The U.S. is the most hard-hit nation by the pandemic.

Amid the yearlong trade row with Japan, South Korea's exports to the Asian neighbor dropped 17.8 percent in June on-year. Seoul and Tokyo have been at loggerheads since July last year, after Japan abruptly rolled out restrictions on exports of key industrial materials to South Korea.

"In the second half of 2020, more countries are anticipated to resume their business activities, which will lead to more investment," Industry Minister Sung Yun-mo said. "South Korea will spare no efforts to help exporters take advantage of the opportunity."

"As the recovery of exports will depend on the progress of the COVID-19 pandemic, we cannot provide a detailed forecast at the current stage," an official from the ministry said.