The Audi e-tron 55 quattro SUV went on sale in European markets in March last year and then in the United States and China during the summer and in November last year, respectively, a company spokeswoman said by phone.

The Audi's first fully electric vehicle comes with a higher-capacity 95-kWh battery pack and its two electric motors fitted to each axle on the front and rear side can generate a combined 360 horsepower, the company said in a statement. 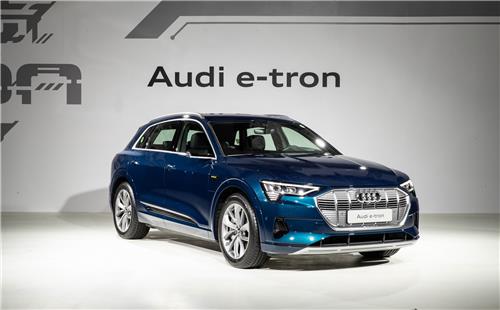 "The current global situation reinforces the importance of sustainability economically, socially and environmentally. And emission-free drive systems have their part to play," Jeff Mannering, executive director of Audi Division of Audi Volkswagen Korea, said in a launching event.

He said the company will provide a three-year warranty for the Audi e-tron, with the guarantee period for the battery reaching eight years.

It can travel up to 307 kilometers on a single charge and accelerate from zero to 100 kilometers per hour in 6.6 seconds, it said.

Its overall sales from January to May nearly tripled to 12,960 vehicles of the four brands from 3,807 units in the year-ago period, according to data from the Korean Automobile Importers and Distributors Association (KAIDA).

The Audi brand's vehicle sales more than doubled to 6,670 units from 2,559 during the same period, the data showed.

The four brands' sales results for the first half of 2020 are expected to be released later this week.