DAEJEON, July 1 (Yonhap) -- Three infection cases of school kids in Daejeon have sent officials and educators to scurry for measures to curb transmission among young children Wednesday, as they might be the country's first school transmissions.

Three fifth-graders at Cheondong Elementary School in Daejeon, about 160 kilometers south of Seoul, were confirmed to have tested positive for the new coronavirus, according to city officials.

One is a classmate of the school's first patient, who was confirmed to have contracted COVID-19 on Monday. The two students took classes at the same cram school, but their schedules were found not to have overlapped.

Another student was found to have come into contact with the first patient at a gymnasium. The two students are known to be quite close to each other, visiting each other's houses frequently. 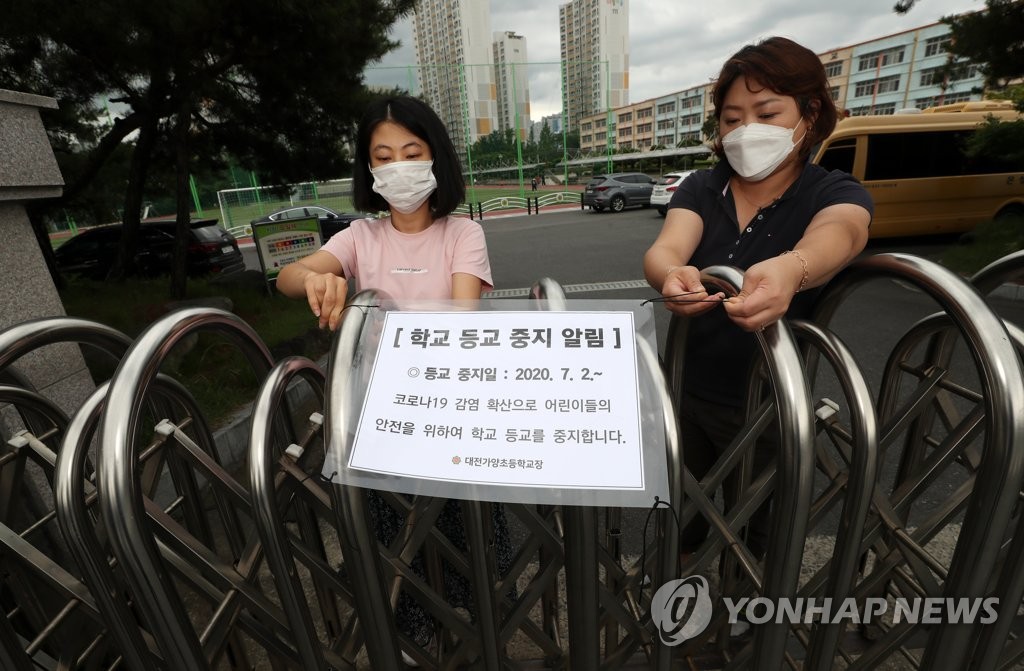 Health authorities said they are conducting epidemic research into the cases, calling them "suspected cases" of transmissions at school.

"We say they are 'suspected patients' who may have been affected by virus spread at school because we have not yet thoroughly looked into how close the (infected students) were at cram schools or inside or outside of school," Korea Centers for Disease Control and Prevention Director Jeong Eun-kyeong said in a press briefing.

Jeong noted that there have been no reported transmissions at school so far, adding that authorities will focus on how the students were exposed to the virus.

She asked the public to refrain from criticizing the school or the students, stressing that there is always a possibility of external infections entering school premises.

Although how the virus has spread hasn't been determined by the health authorities, the infection cases of young pupils have raised questions if quarantine measures at schools are safe and strong enough to protect kids.

The country completed its gradual, three-week reopening of schools nationwide on June 8, with a variety of safety measures to ensure social distancing and stem the virus's spread.

On June 23, the government extended a measure to reduce classroom crowding until mid-July, as the country continued to see a worrisome uptick in coronavirus cases in Seoul and its adjacent cities.

But some educators have voiced concern that children and teachers are constantly being exposed to potential infection risks, as some children do not comply with distancing guidelines and do not wear face masks during recess.

One elementary school teacher said, "It is near impossible to control kids even during break time to put on their masks and keep a distance from each other, especially when it is hot."

As of Wednesday morning, the test results of 159 contacts of the first patient have turned up negative. As more testings are being carried out, it is still too early to conclude how far the virus has spread.

"We feel perplexed to learn that there is still a possibility of infection at school despite tough quarantine measures in place," said an official from the city's education office, adding the office will "try our best to ensure schools a safe place and to stop the spread."

Quarantine authorities ordered a total of 107 institutes and business establishments frequently visited by young students in the city to shut down until July 5 to curb the spread of the virus.